Next Exhibitions | Postponed to March 2021

ARTEFICIA. The art of the honorary doctors of the University of Klagenfurt 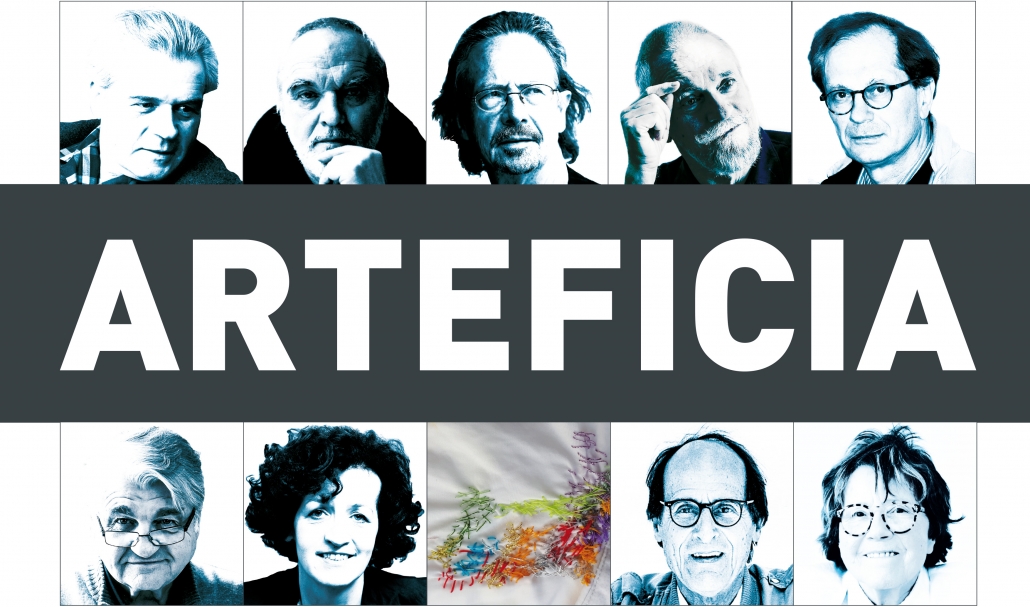 Honorary doctorates under the banner of art

In the fifty years of its existence, the University of Klagenfurt has awarded 35 personalities from the fields of science and art with honorary doctorates. In the anniversary year, an exhibition is dedicated to those artistic Doctores honoris causa, who share their southern Austrian origins. Nearly all of them know or knew each other, each and every one of them is considered a paragou of his or her profession.

The multimedia exhibition ARTEFICIA brings them together in one place for the first time with artifacts, sounds, stories and commentaries. It shows their careers, examples from their own private and museum collections and, in a matrix, the working relationships that link them.

PLEASE NOTE: The exhibition ARTEFICIA in the Great Gallery of the University of Klagenfurt will be postponed once again for Covid19 reasons and will now run from March to May 2021. 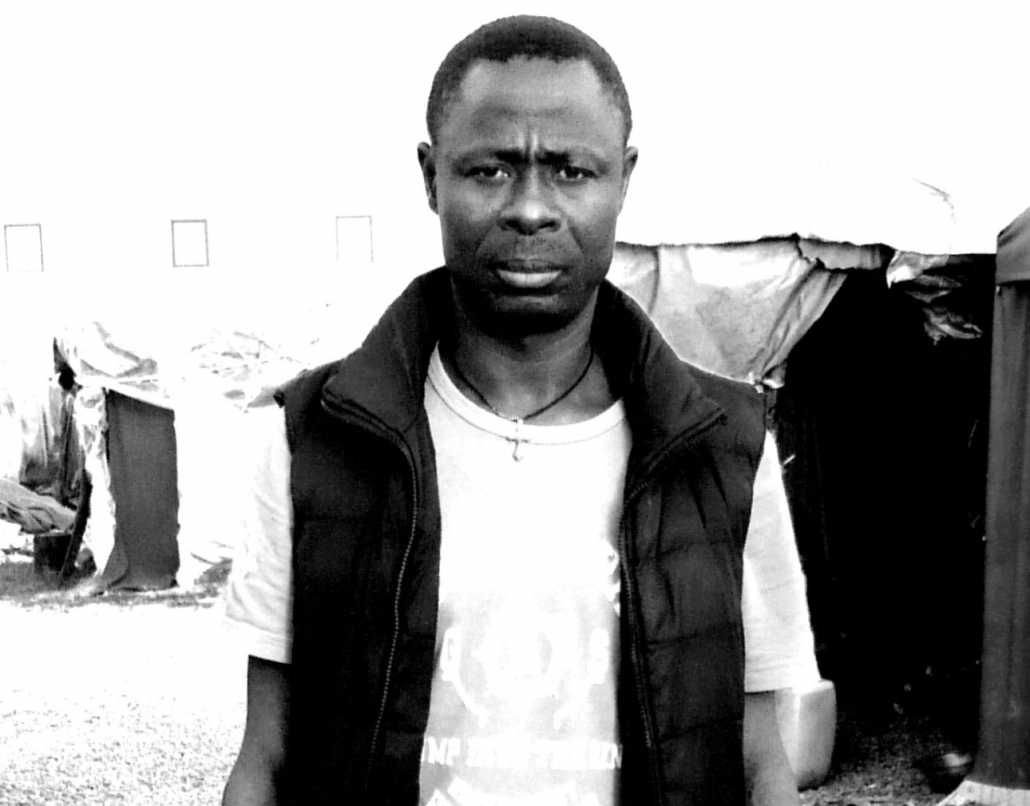 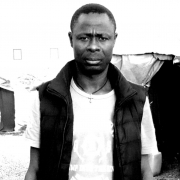 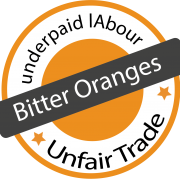 The ethnographic photo exhibition Bitter Oranges is the result of three years of research in which Gilles Reckinger, partly accompanied by Diana Reiners and Carole Reckinger, regularly visited the workers on the orange plantations of Rosarno / Calabria.
Following the participatory approach of the project, he had the workers themselves document their live situations with five digital cameras. Their photos are accompanied by photographs of the researchers.

The aim of the exhibition is, to make a broad audience aware of the slave-like living conditions of the workers. At the same time, the structural conditions of their living situations, caught between European migration policy, price pressure in food production and extreme precarity at the lower edges of the working community are made clear in an easily understandable way. 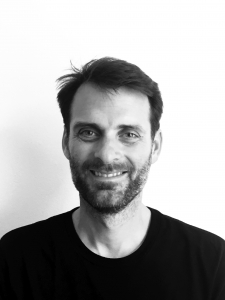 The opening address was postponed to a later date in March 2021!

Many of the boat refugees who come to Europe via Lampedusa end up as seasonal workers on the orange plantations in Calabria. The working conditions are characterised by exploitation and extreme precarity: as day labourers without a contract they earn only 25 euros in a 12-14-hour working day. But most of them are only able to find work for a few days a month, because the competition is tremendous. Shocking living conditions are a result of these starvation wages: the workers have to live in slums, which they build from cardboard and plastic sheets on the edge of town or in a tent camp set up by the civil defence. As the capacity of these camps is far from sufficient, the hygienic conditions are disastrous.

On the one hand, the lecture presents an ethnographical analysis of the connections between the sealing of borders and precarious work in zones of exile. On the other hand, it reflects on methodological and research-ethical challenges of visual-participatory research with illegalised humans and reflects on problems of representation and provisional ways out for research practice.

The lecture is organised by the Department for Cultural Analysis and “Wissen schafft Kunst” in cooperation with the KHG, the Committee “Kirchen für Integration und Menschenrechte”, the Climate Alliance, Bio Austria, the Poverty Network, the Chamber of Labour, Weltladen Klagenfurt and the Dialogue Forum Living Together. 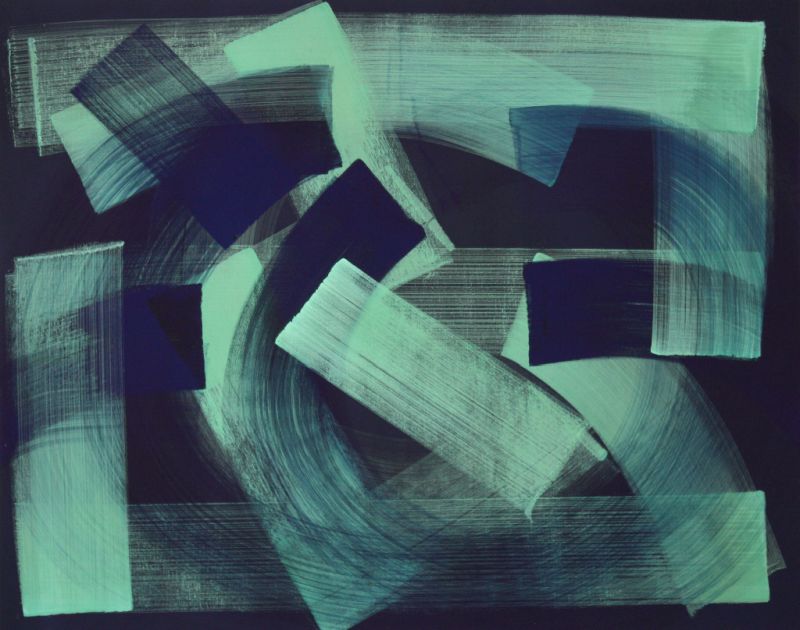 The dynamics of Hirtl’s paintings require a movement of consideration: It is not a matter of a sequence of pictures (or parts of pictures), but of shifting, overlapping, and compressing the contents of the picture and thus its particular meaning. Not silent or rigid viewing, but rather inner participation becomes necessary. It is not a result but an event that presents itself here.
Maria Regina Kecht

Claudia Hirtl born in Wörgl (T) in 1954 lives and works in Vienna. She studied at the Academy of Fine Arts in Vienna, where she later also taught as an assistant professor. In Japan (Osaka and Tokyo) she learned the art of traditional Nihonga painting and focused on eastern philosophy. Hirtl received the Prize for Contemporary Art Tyrol in 2016.

Claudia Hirtl uses egg tempera to paint Hauptsätze or Nebensätze – larger-than-human whole or divided canvases. The scale of pigments used is limited to malachite green, various red earths and several shades of blue. In the superimposed layers the pigments condense and bleed out. The strokes and curves are based on a few selected kanji, the Japanese graphic characters for spirit, soul or heart. Hirtl’s paintings pose the fundamental philosophical questions about existence itself.

In the exhibition in the foyer and in the Great Gallery of the University of Klagenfurt, zwölf Hauptsätze and zwölf Nebensätze are installed for a Passacaglia, which the visitors pace off at their own tempo.

Location: Great Gallery and in the foyer of the University of Klagenfurt

An Artist’s Talk with the art historian Jutta Steininger and the artist took place during the finissage on Thursday, 5th December at 5 p.m. in the Oman Hall.

Ruth Hanko was born in Deutsch-Griffen in the Gurk Valley in 1957. She lives and works as a free-lance artist. There she runs the Alpen-Adria-Atelier, including a large printing atelier and an atelier for smoke- and raku firing. Besides various printing techniques Hanko has also mastered: painting in oil, tempera and acrylic as well as classical English watercolour and modelling in clay. She received her artistic education in numerous courses with artists such as Jože Ciuha, Valentin Oman and Petar Waldegg. She started teaching a while ago, amongst other things, nude drawing. In her own artistic work, she prefers to mix techniques. Her themes are love, gender and death: “They encompass the human being that directly affects, concerns, touches and occupies us. There is no one who can exclude himself from it in any way or pretend that it is none of his business”.

Hanko’s works and cycles have been shown in exhibitions in Germany, Italy, Slovenia and Austria since 1998, most recently in a major solo exhibition at Schloss Straßburg in 2017.

The painted, drawn, printed, occasionally labelled Capricci by Ruth Hanko do not follow reading patterns, they do not comment, explain, report, their media materiality does not constitute stories with punch lines, flashbacks, introduction, main part and conclusion. But we pick up the thread, not to guide Theseus out of the labyrinth. Rather, we wish to follow intricate corridors into the real world, where the poetic and the theoretical become intertwined with the medial pivot.

Ruth Hanko relentlessly urges us to become involved in the context. In doing so, she sets a standard which neither strictly thematically exhausts nor contextually liaises. This something situates pivotal points of direct and indirect mediation in the medium of her imaginative and gestural articulation. The media specification forces us to draw the existential into aesthetic calculation, to place the living within the aesthetic, to question the arbitrariness of judgements.

Guests were welcomed by Alice Pechriggl, Professor of Philosophy, and 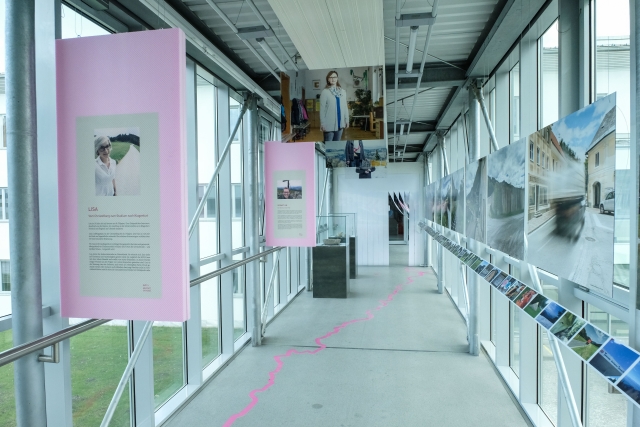 The exhibition GOING GÖRTSCHITZ was created as a part of the sub-project “Selfies in the Görtschitztal” within the EU project “ECHOES from Invisible Landscapes 2016-2018” and was realised by the Department of Cultural Analysis and “Wissen schafft Kunst” in cooperation with the ECHOES collective and artists.

The project “Selfies in Görtschitztal” was realised at the Department of Cultural Analysis (degree programme Applied Cultural Studies). The focus was on foreign and self-perceptions of the Görtschitz Valley and the people living there against the background of the environmental scandal that became known as the HCB-Causa in 2014. Ethnographic and artistic methods were used in the research.

Supported by EACEA and AAA in the context of Echoes from Invisible Landscapes.

The exhibition was opened at the Lange Nacht der Forschung on 13th April 2018 as station U 05 – WAS IST DENN LOS IM GÖRTSCHITZTAL? (What is going on in the Görtschitz Valley?)

Stop and Go in Auditorium 1: EVEN UNDER THE VIOLETS THERE EXISTS NO JUSTICE. Lojze Wieser reads continuously from the Europa-Erlesen-Band “The Echo of a Century”.

In the exhibition: ECHOES WALL. Guests of the exhibition make their (Polaroid-)Selfie of the Görtschitz Valley and search for invisible titles of pictures with the aid of UV -light.

Location: Connecting corridor east between the Main building and the South wing

The exhibition GOING GÖRTSCHITZ was created within the framework of the EU project “ECHOES from Invisible Landscapes” and was realised by the Department of Cultural Analysis and “Wissen schafft Kunst” at the University of Klagenfurt. Since May 23rd in 2019, it is now presented in the market town of Brückl.

Supported by EACEA and AAA in the context of Echoes from Invisible Landscapes.

The opening took place on 23rd May at 6 p.m. in the market town of Brückl with the following programme:

Followed by a joint tour of the exhibition

Region Brückl and a dance performance by the Landjugend (rural youth) 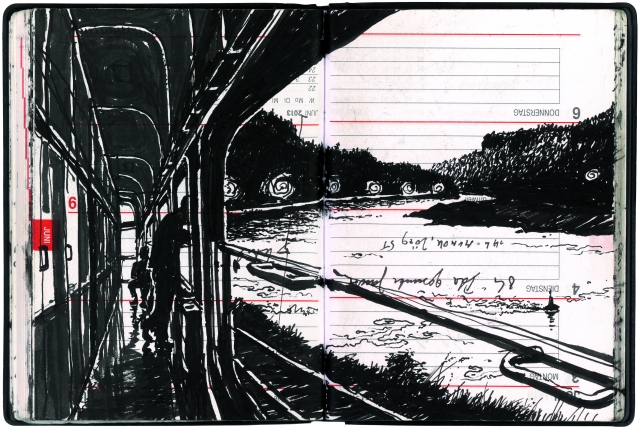 Olaf Osten shifts horizons and focuses on seemingly unimposing things. For the series of works “Pendulum” he conserves real situations on upside down pocket calendar pages and reworks small and large maps to create new views of the world. With the reversal of perspectives and a witty play of proportions Olaf Osten also changes the audience’s view of the world and things.

Olaf Osten was born in Lübeck on the Baltic Sea in 1972. He studied graphic design at the University of Applied Sciences and Arts in Hildesheim and at the Dun Laoghaire College of Art&Design in Dublin. For the past two decades Olaf has lived and worked primarily in Vienna.

Olaf Ostens works are in part, owned by the International Peace Institute, the Wien Museum, the Austrian Federal Chancellery, the Complexity Science Hub Vienna and the Vienna Chamber of Labour. As an illustrator, he is regularly active on an interdisciplinary basis – project partners include the Impulstanz-Festival, the Wiener Festwochen and the mumok / Museum moderner Kunst Stiftung Ludwig Wien. In 2012 he received the Austrian State Prize “Schönste Bücher Österreichs”, together with Ernst Logar.

Olaf Osten is represented by the gallery bäckerstrasse4 in Vienna, his works have been regularly shown in exhibitions in Europe and the USA since 2005.

The exhibition took place in the Great Gallery in the main building from 22nd November until 19th December 2018. 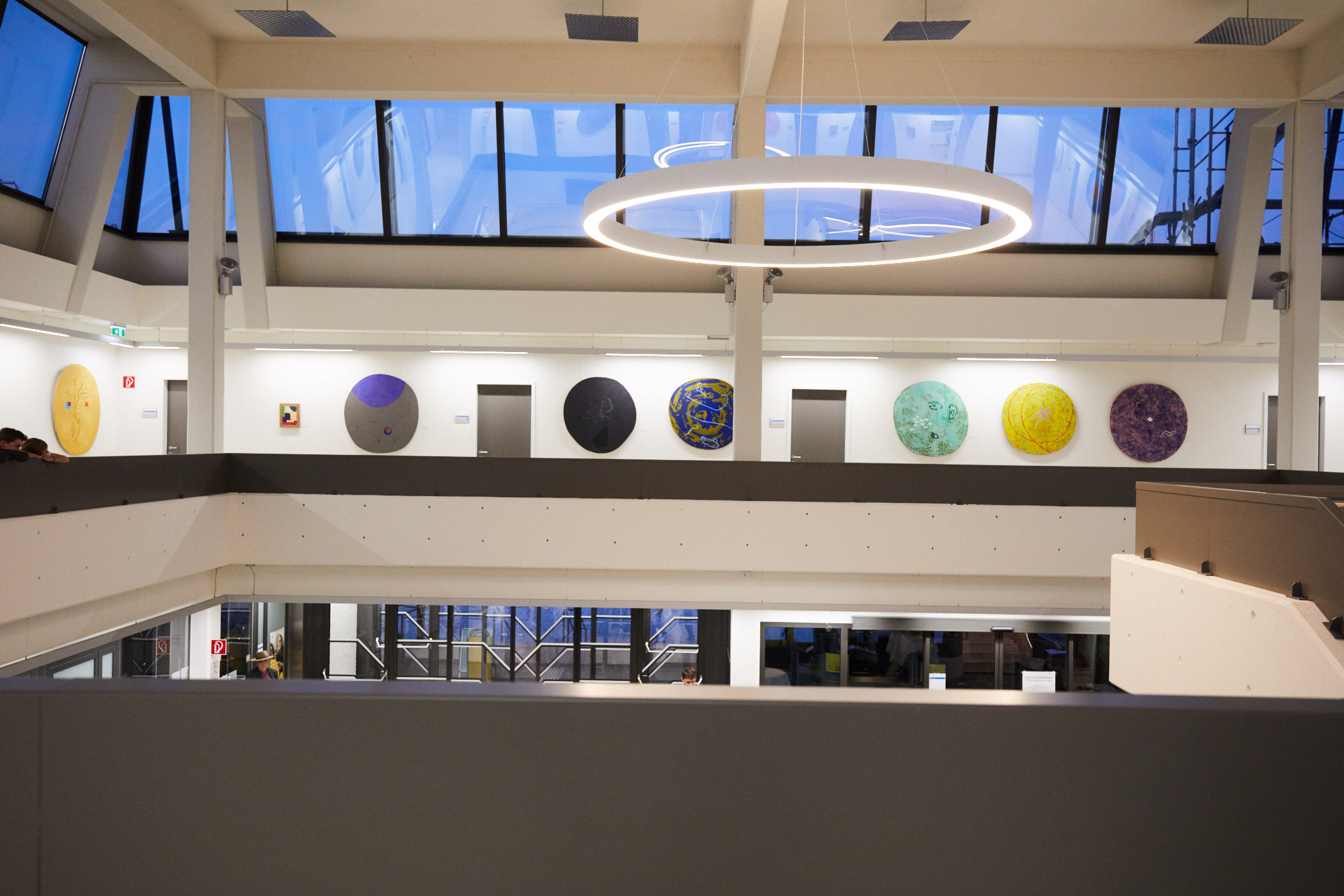 Johanes Zechner was born in Klagenfurt in 1953. He studied painting at the Academy of Fine Arts in Vienna and at the Royal College of Art in London. He lives and works in Graz and in Obermieger near Klagenfurt.

Numerous stays abroad and project trips took Johanes Zechner to Berlin, Hamburg, Patagonia, Israel and the USA. These are as much a part of his work as is the intensive collaboration with authors. The starting point for his extensive oeuvre of paintings and prints is the artistic translation of poetry, including poems by Peter Waterhouse, Inger Christensen and Friederike Mayröcker.

Zechner has been working on the recently completed Tilly Lab Circle series of works since 2011. Symbols and signs are formed on coloured structured wooden panels cut into a circle within the radius of his arm. Even though the individual “loaves” bear the names of writers, these bear no relation to the content. The titles of the works resulted from the coincidence that quotations of famous authors were printed in the sketchbook used for the series of works. Zechner named the works after them.

“They are poetic-meditative pictures whose calm sound seems to slow down the rapid passing of time to finally bring it to cessation. The round picture form, which neutralises all classical points of orientation from above and below, horizon and perspective, contributes to this. The works tear us out of our torturous daily routine in order to throw us back there with full force, through the confrontation with a deeper truth,” writes Christine Wetzlinger-Grundnig in the catalogue published for the exhibition.

An exhibition in the series WISSEN SCHAFFT KUNST, curated by Barbara Maier.