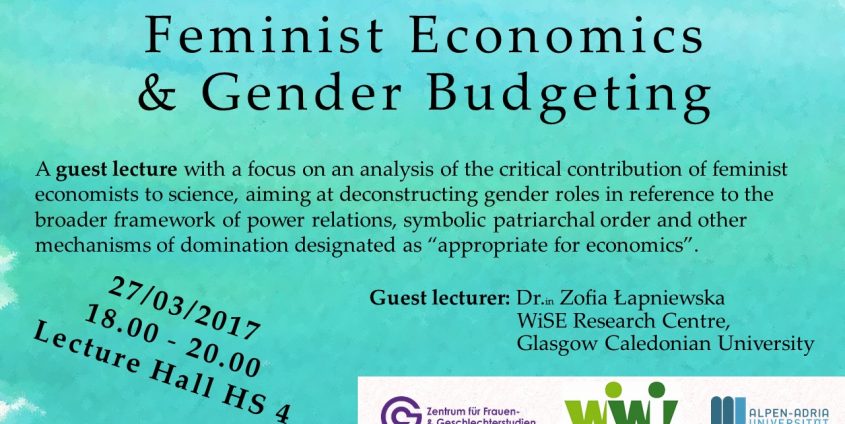 Economics, as a science, and gender, as an element of identity, are both notions of social construction. As such, they are limited by human perception and the particular cultural, social, economic and political environment they are defined in. In this context, feminist economists analyse gender roles in reference to the broader framework of power relations (recognised and deconstructed) and aim to undermine the symbolic patriarchal order. This order is also present in the language and other mechanisms of domination, used by those creating discourse, and is reflected in the selection of topics, methods and models recognised as “appropriate for economics”.

This lecture will focus on an analysis of the critical contribution of feminist economists into science, pointing at roots, motivations and aims of this perspective and major research fields of the school. One such field, unpaid work, forms of its valuation and valorisation with the response of states, which is related to gender budgeting, will be discussed in greater detail. The examples from various European countries will be provided. New thoughts and trends (including well-being and intersectionality) will be debated.

Zofia Łapniewska is an economist, a Women in Scotland’s Economy Research Centre International Fellow at Glasgow Caledonian University and a Gender Studies lecturer at the University of Warsaw. For two semesters in 2015 she was a Visiting Fellow at the Gender Institute at the London School of Economics and Political Science. She also spent more than two years in Germany between 2012 and 2014 as a post-doctoral fellow at the Humboldt-Universität zu Berlin and later as a research fellow at the Technische Universität Berlin.

Her areas of scientific interest are feminist economics, institutional economics, and commons. Her latest publications include ‘Reading Elinor Ostrom Through a Gender Perspective’ in Feminist Economics (2016), (‘Re)claiming Space by Urban Commons’ in Review of Radical Political Economics (2015) and Women on the ‘Green Island’: The Crisis in Poland from a Gender Perspective (a book co-edited with Anna Czerwińska and Joanna Piotrowska, 2010).

ISIE Webinar: „Socio-metabolic regimes and transitions between them“...