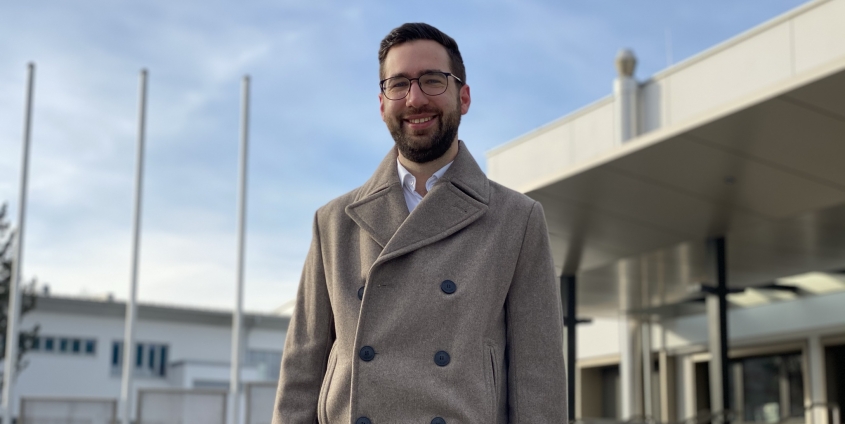 That life opens up paths you never expected is something Johannes Hofmeister, a doctoral student in statistics, experienced only recently. He told us why he decided not to become a teacher (for now), but has become an avid mathematical researcher instead.

Johannes Hofmeister has already conquered the initial vertical metres and is steadily making his ascent: A doctoral student in the doc-funds programme “Modeling – Analysis – Optimization of discrete, continuous, and stochastic systems”, funded by the Austrian Science Fund FWF, he is fond of comparing mathematical research with mountaineering: “You advance towards your goal one step at a time. Each step brings a more beautiful big picture, until the problem is fully revealed to you and you can enjoy the whole view. When hiking, things don’t always lead uphill either; sometimes one has to traverse valleys and face setbacks. However, the fact that in research, as in hiking, one makes progress with every step, is something I find truly wonderful.”

For his doctoral thesis, Hofmeister has set himself the challenge of solving an important use case. In the energy sector the aim is to generate precisely as much electricity as is currently needed, and, as far as possible, from renewable sources. On the other hand, shortfalls in production bear the risk of blackouts. “However, both production and consumption are subject to coincidence. It is possible to calculate certain tendencies with stochastic models: How much can be produced in the winter and summer months and how much under which weather conditions can be estimated. The same applies to energy consumption during different seasons as well as during the day or at night.” Johannes Hofmeister and his colleagues are currently working to find ways of minimising the use of non-renewable forms of energy, while at the same time maintaining security of supply. He goes on to explain: “With respect to the provision of a certain quantity of non-renewable energy, we face an optimisation problem.”

Johannes Hofmeister completed his teacher training qualification in mathematics and geography. While studying, he already worked as a tutor and student assistant under Michaela Szölgyenyi, a professor at the Department of Statistics. She was also the person who subsequently drew his attention to the announcement of the PhD positions in the doc-funds project. “I find it fascinating to see how the formal language of mathematics can be transferred to application problems in the real world”, he tells us. Hofmeister ended up seizing the opportunity to complete a doctorate. At first, he found the study of mathematics to be hard work, but today he raves about it: “Mathematics is a very beautiful science and in its precision it is also a remarkably aesthetic language.” Johannes Hofmeister‘s enthusiasm for mathematics was kindled early on, when he was still a pupil at the secondary school BRG Viktring. He tells us: “ Even then I was intrigued by understanding how real-world problems might be solved through mathematics.”

What would you be doing now, if you hadn’t become a scientist?

They definitely understand the ideas behind my work. But not the theoretical, mathematical aspects.

What’s the first thing you do when you get to the office in the morning?

Since I have only been working from home, the first thing I do when I get to the office is wake up. Once I actually start to work, it’ s the usual things: Check the calendar and draw up a plan for the day, read and answer emails, etc.

Generally speaking, yes. Every now and then, the mind keeps working anyway, and so even during the holidays, ideas might come to me that I have to write down and test straight away.

Poor weather when I’ve planned a trek in the mountains.

A weekend in the mountains when the weather is lovely.

Carl-Friedrich Gauß, because I came across the story of young Gauß solving an arithmetic series problem fairly early in my life and I was fascinated by how this young schoolboy was able to complete this task so quickly.

My fear of heights means that I am anxious about rock climbing, but mountaineering is one of my great passions, so I am keen to overcome this fear.

I am looking forward to the time when I can finally head to the office and meet up with my friends without feeling worried.