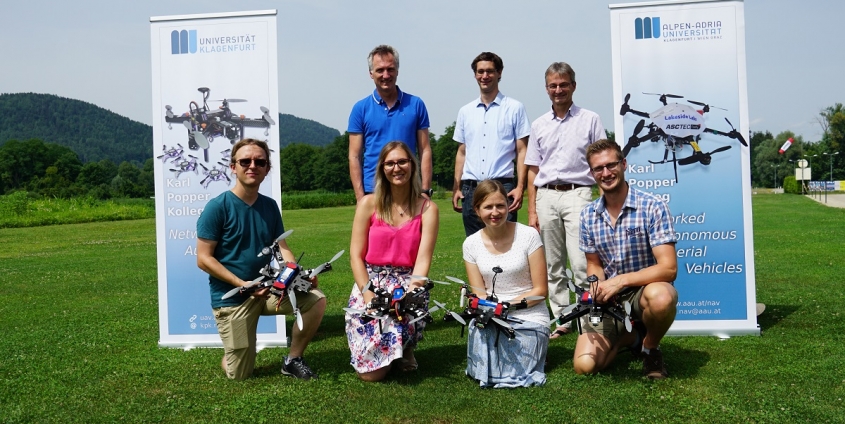 With a total of 9 contributions at this year’s ICRA, one of the flagship conferences in the field of robotics, the University of Klagenfurt has joined the league of the world’s most important robotics hubs. Among the contributors are the young researchers from the Karl Popper Doktorats- und Wissenschaftskolleg “Networked Autonomous Aerial Vehicles (NAV)”, which is currently celebrating its conclusion with a drone flight demonstration in Klagenfurt.

The University of Klagenfurt launched the Karl Popper Doktorats- und Wissenschaftskolleg “Networked Autonomous Aerial Vehicles (NAV)“ in October 2017; having completed a cycle of just under four years, it is now coming to an end. Stephan Weiss, who serves as the speaker of the programme, reflects on a success story: “Together with our young researchers, we have succeeded in significantly expanding our international presence in robotics research.” This summer, four doctoral students – Agata Barciś, Michał Barciś, Roland Jung and Petra Maždin – will complete their doctoral theses on the topics of information distribution, decentralised synchronisation and coordination, and collaborative state estimation.

In all, there are more than 20 researchers working in the field of Networked Autonomous Aerial Vehicles at the University of Klagenfurt. Most of the research is carried out by the four research groups Mobile Systems (Christian Bettstetter), Multimedia Communication (Hermann Hellwagner), Pervasive Computing (Bernhard Rinner) and Control of Networked Systems (Stephan Weiss, Jan Steinbrener). Particular focus is placed on “flying robots” in the form of drones. “Our research addresses various issues: How can drones communicate with each other? How can they distribute tasks for a joint mission? How can they act as a swarm and synchronise their behaviour? How can they best assess their own state?”, Stephan Weiss explains.

The researchers from the University of Klagenfurt received considerable attention at this year’s IEEE International Conference on Robotics and Automation (ICRA), which is regarded as one of the most important international conferences in the field of robotics. Scientists from the University of Klagenfurt were represented with nine publications. In total, the Karl Popper Kolleg NAV has completed over 25 publications within 4 years.

On 13 July 2021, the conclusion of the Karl Popper Kolleg NAV was marked with a flight demonstration at the model airfield of the I-MFG Wörthersee in Klagenfurt. The aim was to carry out a mission involving four drones – from task distribution, coalition building, collision avoidance, optimised information distribution, constellations for synchronised image capture to the generation of a 3D model of the captured objects.

The offers and development opportunities for young researchers in robotics remain a highly attractive proposition in Klagenfurt: On completion of the Bachelor’s degree programme in “Information and Communications Engineering”, students can enrol in the English language Master’s degree programme in “Information and Communications Engineering: Branch of study Autonomous Systems and Robotics”. Numerous externally funded projects, which are implemented in cooperation with industrial partners, offer interested doctoral students excellent opportunities to enter the field of research. 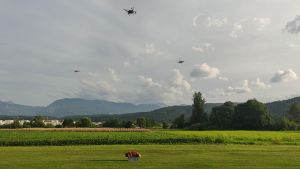 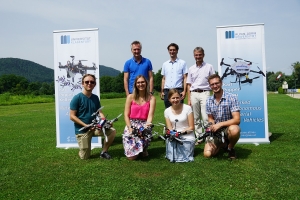 https://www.aau.at/wp-content/uploads/2021/07/DSC07992_klein.jpg 800 1200 Forschungskommunikation https://www.aau.at/wp-content/uploads/2015/09/aau-logo-300x110-300x110without-background3-300x110.png Forschungskommunikation2021-07-14 09:08:592021-07-15 13:01:17Robotics research in Klagenfurt enjoys international success: The Karl Popper Doktorats- und Wissenschaftskolleg for Networked Autonomous Aerial Vehicles concludes with a demonstration in south Klagenfurt
News-Portal of the University of Klagenfurt Back
Heading to Silicon Valley with a degree in Media and Communications