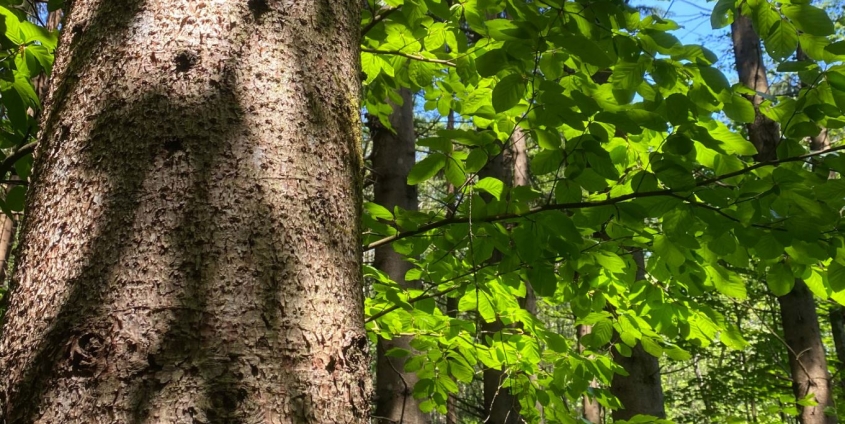 Ever since the Corona lock-down weeks, if not before, many have discovered our forests as places of recreation. The so-called “forest bathing” is considered a stress management method that helps to strengthen the immune system, lower adrenaline levels and relieve the cardiovascular system. In addition, there are the beneficial effects of exercising outdoors in the fresh air. Anyone who regularly walks through the forest in a mindful way, covering a distance of at least three kilometres and walking for an hour, paying attention to colours, light and details and consciously listening to the chirping of birds and the rustling of leaves, will be doing themselves a great service. We scoured the forests around Klagenfurt for the best “bathing” spots.

1.) Pack your rucksack and head up to the Zillhöhe

Klagenfurt has a gorgeous and much-loved natural recreation area, the Kreuzbergl. You can get there in just a few minutes from the city centre. Many Klagenfurters refer to this true natural idyll as their “local mountain”. The complete range of peaks extends around the Hallegger ponds, and includes the Kalvarienberg (588 m) and the Falkenberg (671 m). It is possible to get lost in this large wooded area. The short loop hikes that lead through idyllic mixed forests, past the large “play meadow” and the three Kreuzbergl ponds are particularly popular. The Zillhöhe is well worth a hike, offering a beautiful view of Lake Wörthersee. On Kreuzbergl, anyone who enjoys hiking, walking or going for a run can always find the perfect routes to keep fit.

Details describing the route to the Zillhöhe (in German)

2.) Idyllic hike to the small gem of Flatschach Lake

The trail begins in the Köraus ditch, passing through the forest, along the Flatschacher Bach stream. The beautifully designed Kneipp stations are particularly popular. After about an hour you will reach the Flatschacher See – a veritable jewel of a lake that invites you to linger. Numerous local taverns and snack stations invite you to take a refreshing break. The return route via St. Stefan also has a few special features in store: you pass by the ruins of the Tschachitsch church dating from the 12<sup>th</sup> century; stop off at the organic farm Brandstätter to pick up fresh free-range eggs, milk, yoghurt, pasta and other products. The trail finally takes you all the way back via Waiern.

The Rocking trail near Reifnitz offers a varied two hours in the forest (for the most part) with hammocks to rest in and beautiful vantage points that provide sweeping vistas (details can be found, for example, at Bergfex). The route offers many distinctive features, such as the sacrificial stone, a pagan cult site, or the mountain church of St. Margarethen. Even at the weekends it is peaceful here, and during the week you are virtually alone.

4.) Refreshment at the Ebenthal waterfall

The forest around Ebenthal is believed to be a source of power. If you want to switch off and enjoy the peace and quiet of nature, this is the place for you! One particularly beautiful and leisurely route is the path to the Ebenthal waterfall. The short hike takes about an hour and has a bit of everything: Cross a small meadow to reach a dirt track and then you enter the forest. After that, all you have to do is follow the murmur and rush of the water and you will be rewarded with the sight of the thundering Ebenthal waterfalls. Incidentally, this jewel of nature can be admired all year round; in the winter, the waterfall freezes over and acquires a very distinctive charm. If you like, you can also grab your bike and take a cycle tour of this market town.

Switch off for a moment during your lunch break or squeeze in a short fitness session in between: Situated a mere 5 minutes from the University of Klagenfurt you will find the small and the large Treimischer Teich ponds. The smaller of the two ponds in particular, which lies deep in the forest, is a lovely and tranquil spot. The best way to reach it is to park at the Abbey of Viktring and then follow the Mönchsgartenweg. Following quiet forest paths and crossing small bridges, the pond can be circumnavigated in roughly half an hour. If you want to work up a sweat, simply complete the exercises on the fitness trail along the way!

Details of the fitness trail (in German)