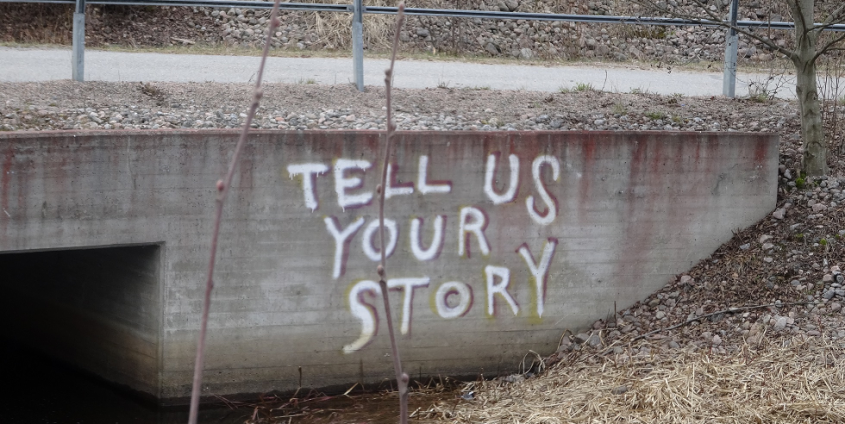 Stories have been told throughout the existence of humankind. While audiences were somewhat limited until the 2000s, thanks to the Internet, virtually the whole world is now available to practically anyone as a potential listener. In her research, Christina Schachtner, professor emeritus at the Department of Media and Communication Studies at the University of Klagenfurt, is particularly interested in the “narrative subject”. Now, her book bearing the same title has been published as an open access book in the English language. In an interview with her, we discuss the tragedies and comedies that are performed in virtual space.

What are the roots of your research interest in storytellers on the Internet?

My publication follows on from a study in which we examined the digital practices of young people across different continents[1]. Having completed the study, I was left with the feeling that there was a lot more to be discovered from these interviews. In the course of my secondary analysis, I discovered that what these interviews reveal are stories. They all have a specific focus. The scenes and episodes narrated by our interview partners are all grouped around this central theme.

Do these key issues have anything in common?

I identified seven different narrative types, each with their own set of stories. One such type is networking, for example. At the core of these stories lies the desire to connect with others, to belong, to receive recognition. A web user once made a self-portrait while lying in front of a laptop and stated: “I am lying in wait for a relationship.” He said he was waiting for someone to contact him. If that did not happen, he would grab “the Facebook fishing rod”; and using that, he would pull someone out of the pond.

30 years ago one could not have lurked in this way. Is the phenomenon you have observed a recent one?

Stories have been told throughout the existence of humankind. As Ludwig Wittgenstein said, telling stories is as important as eating, walking and playing.

In order to be able to act, we need to understand and interpret the world we live in. Stories are our attempt to understand ourselves, others, the world. Even the Bible contains a wealth of stories that convey religious messages. The Internet has given us new narrative stages which don’t leave the stories told there untouched.

What is so novel about the Internet as a narrative stage?

Today, anyone equipped with a computer, language skills and economic resources can access these narrative stages. We are free to decide for ourselves whether we want to tell stories and we do not have to wait for an invitation, e.g. from a television station. The web offers many narrative tools such as word, image, video, sound. The Internet is a cross-border medium, which means that we are not limited to the local area. When we tell stories, we can, in essence, be read, heard and viewed all over the world. This emphasises the individual relevance. Anyone can become a network celebrity or at least dream of becoming one.

Do we tend to talk about the good or the bad online, or, to put it differently: What is it we are performing on the Internet – comedies or tragedies?

When we tell a story, we desire recognition and acceptance. That is why we often tell stories in which we respond to accepted success or beauty criteria. This also leads to the reproduction of gender stereotypes. Women often present themselves as beautiful and desirable, while men are more likely to play the hero who can master any situation and is physically strong.

Does the negative also occupy a place in the virtual world?

Some stories describe problems and diseases. The aim here is to learn from others, to find fellow sufferers or to express what is troubling you. What all these stories have in common is that they seek to demonstrate ways of ultimately overcoming difficult situations. This reflects the aspiration to succeed in our society. Those who describe crises that have been overcome often want to serve as role models for those who are experiencing difficult life situations.

In politically and socially turbulent times, there is a tendency for hashtags to form, which hint at a sense of togetherness. What is the role of commonality?

The representations have an egocentric aspect on the one hand, but they also have something in common. Our stories are rooted in a specific society that is currently experiencing major changes. They represent a response to social challenges, which is why I have called them narrative time signatures. Let’s take the self-staging narratives as an example. In today’s society, the following applies: The individual has to captivate, stand out, be better, battle their way into the arena of visibility. We are all subject to this. At the same time, many of us are losing our traditional social networks, such as family and friends, due to mobility necessitated by education, work or migration. Because we are essentially social beings, we cannot allow this to happen. So, in addition to the more egocentric self-staging narratives, we also see the aforementioned networking narratives that document attempts at community building, such as photoblogs involving bloggers from different parts of the world, as one blogger from the United Emirates described.

Are the stories the same all over the world?

No, they are heavily influenced by the respective society. For instance, we interviewed Arabic Internet users, for whom self-staging played no role. They primarily addressed the public with politically charged stories, involving new beginnings and disruptions that arose during the time of the Arab Spring.

What stories are currently on our agenda?

Stories change, depending on the social context we face. The stories currently circulating in social networks are about the pandemic and the lockdown. Increasingly, these include narratives that either deny the pandemic or reveal the supposedly true sources of the pandemic, such as dark forces, certain economic interests, or individuals like Bill Gates.  Conspiracy narratives of this kind can be captivating, as the psychoanalyst Martin Altmeyer wrote in the Frankfurter Allgemeine Sunday edition, because they address the dread of a menacing reality. Inner anxiety can be dispelled when the source of the danger seems clear and can be named. Where there is danger, we long for deliverance. Conspiracy narratives provide their inventors with a means of self-staging and offer the audience a defensive system.

What part does exaggeration play as a stylistic device?

In the contest for attention, I have to make many things brighter, bolder, more sparkling in order to distinguish myself among the millions of narrators. Many people work very hard to create the best picture or the best story, for example when an Instagram boyfriend has to play the photographer for hours and hours until a post is finally in the box. Maintaining an online presence requires hard work, often 24/7, as one blogger told us.

What research questions would you like to address next?

I have now turned to the question of “migration/transnational life and media”. To this end, I conducted around 40 interviews with people who moved to Germany and Austria from various countries, predominantly not as refugees, but for educational, relationship and work purposes. Narrating one‘s own story plays an important role in how we process our experiences and access our new surroundings. It also takes the form of poetry, music, theatre, and films created by migrants. The result is a hybrid world of sound and experience through the combination of sounds and rhythms of different musical genres from different geographical areas or of word images that link impressions from the country of origin and the country of migration. Digitally supported narratives serve to maintain family networks and create a new type of family: the global family.

[1] The other researchers involved in this study were Nicole Duller, Katja Langeland, Katja Ošljak, Heidrun Stückler.

About the latest book

This open access book considers the stories of adolescents and young adults from different regions of the world who use digital media as instruments and stages for storytelling, or who make themselves the subject of storytelling. These narratives discuss interconnectedness, self-staging, and managing boundaries. From the perspective of media and cultural research, they can be read as responses to the challenges of contemporary society. Providing empirical evidence and thought-provoking explanations, this book will be useful to students and scholars who wish to uncover how ongoing processes of cultural transformation are reflected in the thoughts and feelings of the internet generation.