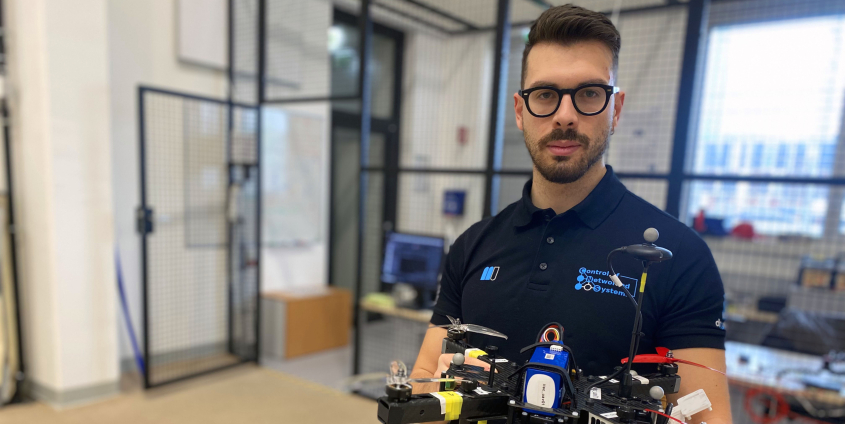 How does a drone know precisely where it is, how it is oriented, and at what speed it is moving from A to B? One possibility is the use of global positioning systems such as GNSS. In this case, the position of the robot is geolocalized through satellite signals. Modern robotic systems, however, require navigation capabilities in GNSS-denied environments. Such systems are often referred to as “inertial navigation systems”; they carry an inertial Measurement Unit (IMU) whose acceleration, and angular velocity measurements are fused with complementary sensors (e.g. camera, Lidar, radar, etc.) which then allows the state of the robot or drone to be inferred even in GNSS-denied environments.

“A drawback of inertial navigation systems is a weakness in terms of robustness and accuracy of state estimation due to their intrinsic bias in the measurements,” says Alessandro Fornasier, who conducts research in the Control of Networked Systems group led by Stephan Weiss at the University of Klagenfurt. To estimate the state of the robot, researchers therefore use its orientation, position, and speed, so-called filters, which have been based on the same technique since the middle of the 20th century. Recently, a new technology, the so-called “Equivariant filter,” developed by Robert Mahony (Australian National University), was introduced. This shows increased robustness to many erroneous initial conditions as well as improved accuracy compared to the previous industry standard, and it applies to a group of systems called “systems with symmetry.”

Alessandro Fornasier, in collaboration with the Equivariant filter’s creator Robert Mahony and other colleagues, has now presented new theoretical results on inertial navigation systems in two publications. A new mathematical approach to the inertial navigation problem has been introduced, fitting inertial navigation systems in the group of systems with symmetry, and describing how such results translate into practical implementation. The results are convincing: the new methodology deals better with measurement bias, and surpasses standard methods on several levels. “The estimated state of a robot’s position, orientation and speed is closer to the real state and this more accurate estimation is achieved faster,” Alessandro Fornasier continues.