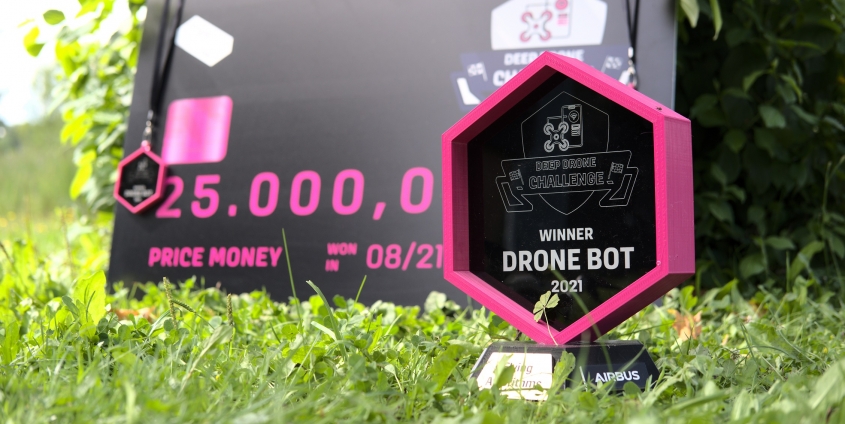 Agata and Michał Barciś and their fellow researcher from RTB House in Poland, Michał Jagielski, competed in the Drone Bot Contest at the Deep Drone Challenge in Ingolstadt, Germany on Saturday 7 August 2021. The competition is organised by start-up incubator brigkAIR and Europe’s largest aircraft manufacturer Airbus. The three young scientists were delighted to receive a prize of 25,000 euros.

“Drones are increasingly used in a variety of applications, including industrial inspection, surveying, emergency response and delivery. As a result there is a growing need to develop innovative software solutions to automate and enhance these types of missions. The Deep Drone Challenge is a drone competition that aims to boost the development of these drone applications and facilitate new approaches,” the organisers from brigkAIR and Airbus state.

Enthusiasts, start-ups and students from the fields of aviation, artificial intelligence and robotics were invited to enter the competition and work together in interdisciplinary teams to solve various tasks. The team consisting of Agata and Michał Barciś along with Michał Jagielski opted to participate in “The Drone Bot” contest.

This was their task: Manned aircraft communicate with air traffic controllers. But how can unmanned drones process and execute voice commands?  Using speech recognition technologies, the participating teams had to steer a CityAirbus from Ingolstadt Central Station to Munich Airport. The objective was for the drones to request permission to take off and land in real time via voice recognition, and to correctly process alterations during flight and landing.

Privat English and American Studies: A passion for language and culture