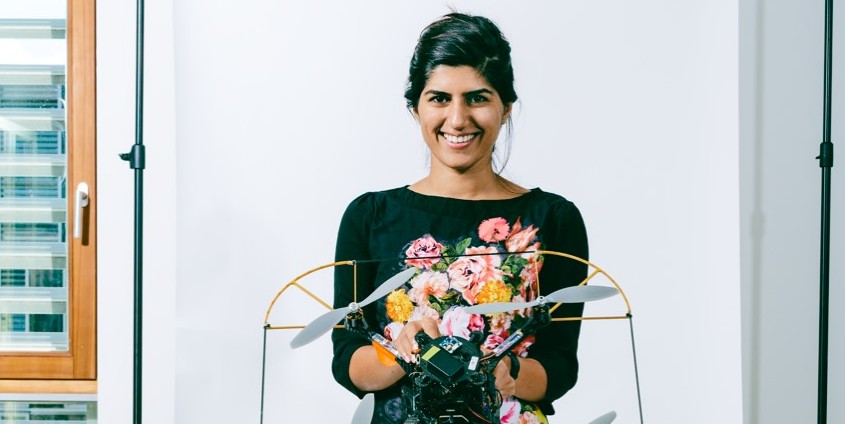 Samira Hayat follows a single plan: She wants to be able to focus on the things she really cares about. The electrical engineer from Pakistan talked to ad astra about the research work that is currently most important to her.

Samira Hayat is following her calling: She has been a member of the Mobile Systems research team at the Department of Networked and Embedded Systems since 2012. Before that, she studied in Trento. Many years have passed since she left the “comfort zone” of her home country Pakistan and embraced the challenge of finding her way around new cultural spheres. Hayat is no stranger to leaving comfort zones behind. In doing so, she continuously discovers fresh delight in her work and in her life.

Hayat’s research explores networks of drones. Drones that perform aerial patrols of vast areas and solve complicated tasks often rely on a large number of individual helicopters, which have to cooperate and communicate. This requires network technologies. Compared to networks located at ground-level, experience has shown that the demands posed by the airspace represent a far more complex challenge. “They are highly mission-specific. Depending on whether my aim is to observe a construction site, to map a large area, or to distribute goods, I need the network of drones to draw upon a different set of characteristics each time. I chose to specialise in a fourth category – rescue missions.“ For instance, in order to rescue a casualty buried by an avalanche, the drones must locate the person very quickly, but must also pass the information on to the emergency services rapidly, so that they can act without delay.

Listening to Hayat as she speaks about the challenges of her research work, the enthusiasm with which she approaches the subject is apparent. She links this to another mission: „The human factor is also important for me. The work I do can really make a difference.” The rescue missions performed by drone networks are highly involved, covering many separate sub-sections such as detection and communication. Currently, she is particularly interested in determining optimal processes from a mathematical perspective: Would it be better to merge these sub-sections for the purpose of a joint mission, or should they be split? Consequently, mathematics is gaining importance in her work and this, she admits, is something she was rather anxious about at first. However, she soon found that “once you have immersed yourself in the subject, you really begin to enjoy it.”

Taking turns, a pronounced practical orientation and theory both tend to feature strongly in Samira Hayat’s work. Listening closely while she speaks, a clear impression emerges that the right diversion and challenge always came at exactly the right time. Having long held an interest in mathematics and physics, she chose a rather abstract degree in electrical engineering, as mechanical engineering was less highly regarded in Pakistan at the time.  “Electrical engineering has a lot do with using your imagination and less with physical devices. When I compared my decision with other options, it was precisely this challenging abstract aspect that drew me to electrical engineering“, Hayat explains.

Ultimately, it proved to be the right decision. Concentrating on the networks of drones allowed her to benefit significantly from “learning by doing” when she first came to Klagenfurt. The experiments were very closely linked to the hardware, and experience showed that the little helicopters do not always obey the commands they are given. “I really enjoyed this part of the work. Not everyone considers it to be academic, but this particular field is definitely part of scientific practice.” Hayat has spent the past year at her desk engaged in theoretical work. She is close to completing her doctoral thesis. “I have reached the point where I am able to appreciate how much I have learned, and what potentially remains to be discovered. I’m also aware that time is running out.”

This spring, Hayat will be spending four months as visiting researcher at the prestigious Carnegie Mellon University, Pittsburgh. She is looking forward to becoming acquainted with new approaches and to presenting her own research results. Once more, Hayat is on a journey; one of her great passions alongside cooking and spending time with friends. “I have always wanted to travel the world”, she says. Hayat grew up as one of seven siblings; her father is a doctor. Her four sisters also chose to become doctors, following their father’s wish. One brother qualified as a pilot and another brother is currently pursuing an engineering degree. Hayat finds it hard to imagine returning to her native country one day, and following a traditional path involving marriage and family. However, she is keeping an open mind: “Anything could happen. I try to be as flexible as possible, and that demands a lot of energy. But I think this is a better use of energy than when it is invested in making plans, which end up being thrown overboard.” This also applies to the time after her doctoral studies: It remains to be seen what will seem important and right at the given time. An academic career, a position in industry, or starting a business venture – the possibilities are endless.

A few words with … Samira Hayat

What career would you have chosen, if you had not become a scientist?
So many things. I am glad I was sure about engineering when I started

Do your parents understand what it is you are working on?
They often surprise me with how much they understand

What is the first thing you do when you arrive at the office in the morning?
Check my emails with a cup of coffee

Do you have proper holidays? Without thinking about your work?
Yes, I can switch off my work mode, and by that I mean think only a maximum of one hour a day about work

What calms you down?
Communication
Who do you regard as the greatest scientist in history, and why?
Many, for example Tesla, who worked just for their passion for science
Why do so many people fear the technical sciences?
Because of the complexity of scientific language and/or the late introduction to such language.

What are you afraid of?
Of letting my fears get to me

What are you looking forward to?
Life that will come.

Back
Degree ceremony for the graduates of the Alpen-Adria-Universität