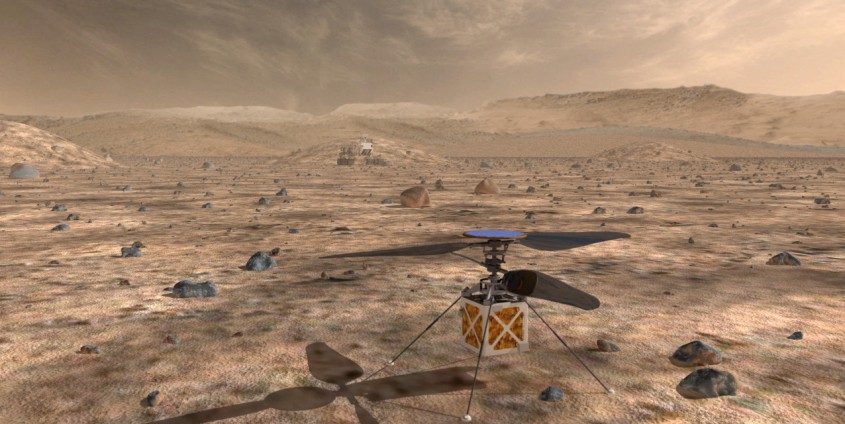 According to NASA’s Jet Propulsion Laboratory, on 30 July the new Mars Rover “Perseverance” will take off from Cape Canaveral, bound for Mars. Also on board is the first ever “Mars helicopter”, which will undertake exploratory flights. The helicopter is navigated using a technology that Stephan Weiss, Professor at the Department of Smart Systems Technologies, was instrumental in developing.

During a flight demonstration in 2013, Stephan Weiss, who was a JPL-NASA staff member at the time, demonstrated his drone navigation technology to Charles Elachi, who was the head of JPL. Elachi asked him: “Can we fly this on Mars?” This marked the beginning of a successful development story, which will culminate on 30 July 2020 in the Mars Mission 2020 deployment of an adapted version of the drone flight technology developed by Stephan Weiss.

The Mars helicopter will be the first to perform flights within the atmosphere of another planet. It is hoped that in the future this will allow new perspectives to be gained on the hitherto alien planet. The tiny helicopter is unmanned. Because there are no landmarks like GPS on Mars, in order to orientate itself, the helicopter will have to use its cameras like eyes.

Stephan Weiss (Department of Smart Systems Technologies) played a crucial part in the development of this Mars helicopter. For his doctoral thesis at ETH Zurich he developed an algorithm that permits navigation via camera, without requiring a GPS signal. This technology has been continuously advanced in recent years and will now be deployed during the Mars Mission, scheduled to start on 30 July 2020.

In Stephan Weiss’ own words: “At first, there were just a few lines on the computer monitor; now the idea is really taking off and will permit what was previously unimaginable in the exploration of new spheres.  I am delighted that my work and the ideas I developed in my doctoral thesis can contribute to this important stage in the exploration of Mars.”

ÖWF/Florian VoggenederNavigating with the eyes of a camera: How can helicopters navigate on Mars?