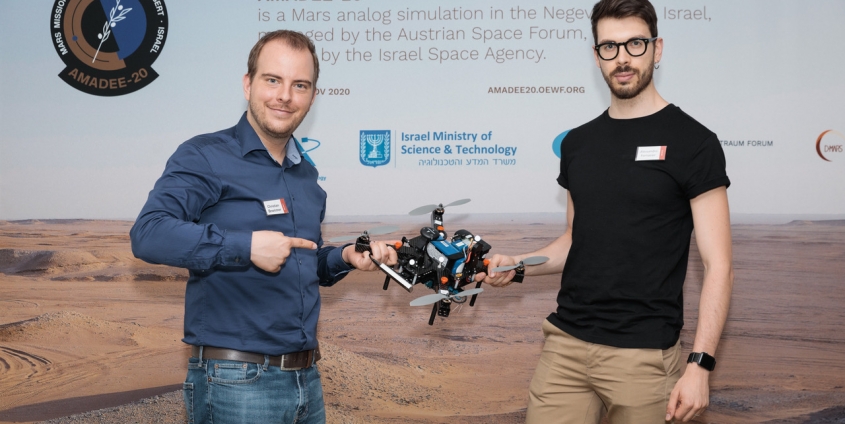 Machines usually use navigation systems such as GPS to locate themselves in outdoor areas. However, other planets do not have such a system yet. Thus, different methods need to be found to use helicopters for the exploration of another planet. In Austria, a team at the University of Klagenfurt is researching the question, “How can a robot navigate and localize itself without GPS”. The project AMAZE aims to answer this question.

The core of the AMAZE project within the Analog Mars mission AMADEE-20, which is led by the Austrian space agency (OEWF), is the camera-based navigation. For this, a helicopter is equipped with a camera that serves the same purpose as the human eye.

The camera is used to visually detect the environment, sense obstacles, and allow safe navigation in the surrounding area. The “brain” of the camera will record impressive and informative imagery of the Mars surface, which will help us, humans, to understand the red planet just a bit better.

Co-Investigator of AMAZE, Christian Brommer explains how it works: “The goal is to record information of the surface fast and efficiently to accurately determine changes in the position of the helicopter. Using a helicopter allows us to vary the distance between the camera and the ground, which affects the area, that is covered by a single pixel. This enables us to sense the environment and record images with the quality needed for a specific situation. As an example, we use small distances for the recording of scientific data because it focuses the resolution of the camera to a small area. If we want to travel far distances, high altitude flights are better to gain a more general oversight. Using vision-based navigation allows the helicopter to explore various areas and find its way home or detect the position of astronauts, which might work on the surface. The resolution of these images will be better than the satellite images recorded by the Mars orbiters, which has already helped to understand the planet better. “

A team of twelve people under the direction of Stephan Weiss, Christian Brommer and Alessandro Fornasier at the University of Klagenfurt is working on finalizing the navigation component of the helicopter. The team already participated in the previous analog Mars mission in 2018 lead by the OEWF. The insights of 2018 helped the team to understand the challenges of camera-based navigation on Mars-like surfaces. The recorded data was used to further improve their algorithms, that are used to navigate the helicopter. A completely new helicopter-platform, an extended sensor suite, and improved algorithms are used to ensure a robust and autonomous mission in October 2020.

The team is also happy to welcome two researchers from NASA’s Jet Propulsion Laboratory (JPL), where Weiss and Mr. Brommer worked previously. The data that is recorded during the AMADEE-20 mission will be shared with JPL for further development of their navigation components toward future Mars missions. First results from a helicopter on Mars are expected in 2021 after NASA’s helicopter scout “Ingenuity”, arrives on the red planet.