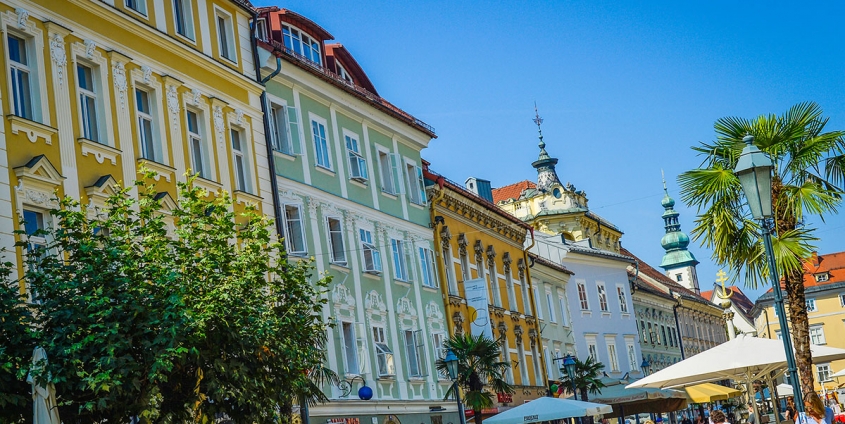 Until 1514, the small town of Klagenfurt was virtually unheard of, then – more than 500 years ago – a devastating fire reduced the town to ashes, and this proved to be something of a godsend. The town was owned by Emperor Maximilian I, who was also the Archduke of Carinthia. To spare himself the cost of rebuilding the town, he gifted it to the Carinthian Provincial Estates in 1518. Klagenfurt then gained the status of a provincial town and was also made the new capital of Carinthia. The estates didn’t hesitate to splash out: By rebuilding Klagenfurt, they created the only ideal Renaissance city in modern-day Austria.

Ideal cities were an idea prevalent among 16th century city planners, but the concept itself had been around in architectural theory since ancient times. It then became more widespread during the Renaissance period, when Alberti or Filarete wrote a treatise on the aesthetics and utopia of ideal cities. All approaches typically called for city plans laid out symmetrically. Avoiding organic growth at any cost, the utopians were looking for the “master stroke”. However, very few of these ideal cities were ever actually built and Klagenfurt is one of a small number of examples.

Inspired by Northern Italian fortification techniques and following the plans of the master builder Domenico dell’Allio (de Lalio) from Lugano, work started in 1527 to build a sophisticated fortification and city designed on a drawing board. Firstly, the Lendkanal canal was dug to connect the city to Lake Wörthersee. This canal provided the water for the city moat that was then dug – this was 7 m deep and between 34 and 38 m wide. The material produced from digging out the moat was used to bank up the city wall, which was reinforced on the outside by a 15 m high rubblework wall.

The city fortification took the form of a regular rhombus with a lateral length of around 700 m. From the mid-16th century, the four corners of the structure were fortified with bastions. Similar bastion-like constructions protected the four central city gates, which were adorned with figurative, three-dimensional crests. Wooden bridges led over the moat to the city gates whose names are still remembered today in the names of the current city’s ring roads: St.-Veiter-Ring, Völkermarkter Ring, Viktringer Ring and Villacher Ring.

Once the defences had been built at great financial cost between 1527 and 1591, more and more construction work got underway inside the city walls from the 1570s onwards. The three major projects of the time were the Landhaus (the site for political gatherings and the representative office of the estates), the Bürgerspital (a kind of hospital) and the Collegium sapientiae et pietatis, which was a humanist educational institution and the precursor to today’s university. Churches were built, such as the Protestant Holy Trinity Church (today’s Catholic Klagenfurt Cathedral), and the Jesuits later founded an abbey here during the Counter-Reformation. Increasing numbers of nobility and townsmen and women moved into the city, needing places to live and work. Next to the Old Town, the so-called New Town was born. It was seven times the size of the old one. Its streets were planned on the drawing board following a uniform grid system and it still exists in today’s city. At the heart of the New Town was the Neuer Platz with its Lindwurm fountain, which was produced from a huge block of chlorite schist from Kreuzbergl hill at the end of the 16th century by an unknown master and became the symbol of the city of Klagenfurt.

These days, you will only find isolated remains of the former city fortifications, mainly near the Villacher Ring. The inner ring road around the inner city still follows the course of the former city wall. Like in so many other places, when the French occupied the state capital in 1809, they destroyed all the walls, bastions and gates of the defensive fortifications. The only remaining gate, the Völkermarkter Tor, fell victim to a pickaxe in 1867. The squares and grand buildings of the inner city lend Klagenfurt an enchanting flair. With their Baroque, Rococo and Art Nouveau façades, they flank the Alter Platz and the Kramergasse, Austria’s first pedestrian zone (1961), and invite you to wander and while away the hours in shops and cafés.

Many thanks to Birgit Stegbauer and the CIC Carinthian International Center for allowing us to use this text.

aau/Romy MüllerSo, are you just out for a walk … or are you soaking up the atmosphere...