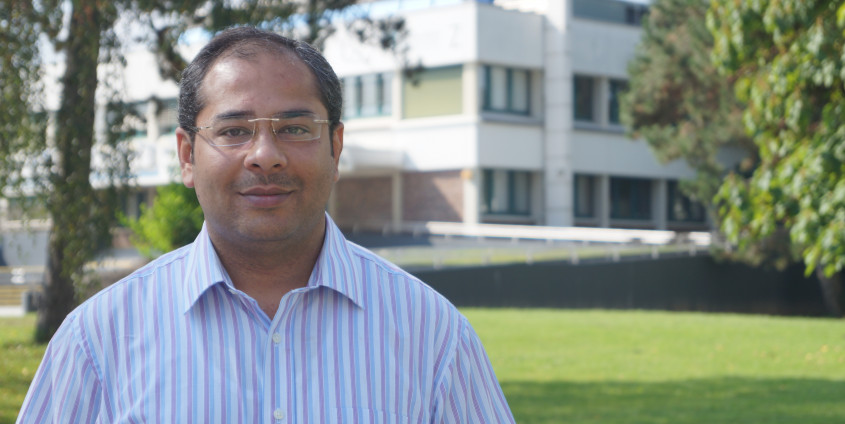 The information technology specialist Raheeb Muzaffar has developed an application-layer framework that improves the transmission of videos between moving drones and mobile devices located at ground level. His work within the ICE doctoral programme will be completed soon. He explains what makes this technology innovative and talks about his plans for the future in a conversation with AAU-News.

Raheeb Muzaffar was already aware of what to expect when he arrived in Klagenfurt as a PhD student, travelling from Islamabad, the capital of Pakistan, in December 2012: He travelled well before, had experience working with various universities and professional organizations, and was acquainted both with the European culture and the research environment. The doctoral programme “Interactive and Cognitive Environments (ICE)” suited him perfectly, allowing him to conduct his research in an international environment: doctoral students accepted into the programme are funded for a period of three years. During this time, they work at two universities. The research teams at the Alpen-Adria-Universität and the Queen Mary University in London offered Muzaffar, who wanted to work on the communication between drones, an environment that allowed him insight into various laboratories and research approaches. By combining the key research areas he experienced in Austria and Great Britain, he ultimately arrived at his very own topic: video transmission in drone networks.

He spotted a problematic issue in this context, which he has studied very closely over the  past few years. “In a situation where several drones are airborne and are transmitting videos to several units located at ground level, we cannot currently guarantee that the footage will be reliably transmitted.” The problem is that the receiving devices do not have a feedback mechanism for the video packets being transmitted from the drones. The missing feedback mechanism causes unreliability rendering a distorted video reception. Also, when the transmitting devices and the receiving devices are in motion, the wireless transmission conditions are subject to continuous change, introducing an additional factor of uncertainty.

To address this problem, Raheeb Muzaffar has developed a so-called “video multicast streaming framework”, which allows feedback from multiple ground devices to the drones to add reliability allowing a smooth video reception. However, the framework is even more capable: “The drone does not only learn whether the video has arrived, but thanks to the feedback mechanism, the drone can adjust the transmission rate and the video quality to match the prevailing wireless conditions. Thus, the transmitting drones can re-send lost video packets following the transmission and video rate adaption.” Video communication between drones and receiving devices is useful for various applications such as search and rescue, surveillance, and disaster management. When we asked him, if he can make profitable use of his technology, Raheeb Muzaffar laughed. At various conferences, he talked to the developers from the industry, who confirmed to him that modules endowed with similar functionality are expensive, and that the WLAN protocol requires modification. However, his application is freely available. Anyone wishing to commercialise the technology as a product, is able to do so. In any case, over the course of numerous simulations and experiments, he has demonstrated that the streaming framework works and uses the conventional WLAN protocol without modifications.

Muzaffar’s research in Klagenfurt is coming to an end. By November, he will complete his doctoral thesis, and will pull up stakes in Klagenfurt, following his hopes and dreams to work in the research-based industry. The researcher was accompanied by his wife when he came to Klagenfurt. In the meantime, they celebrated the birth of their daughter. The Muzaffar family intends to travel more: “I am not tied to one location. I would enjoy working anywhere in Europe, but we also like the idea of moving to New Zealand.”

A few words with … Raheeb Muzaffar

What career would you have chosen, if you had not become a scientist?
If I would not have become a scientist, I would have become a social worker. Before turning to research, I worked with Non-governmental organizations including iMMAP and UNICEF thinking that my technical expertise could help expedite the social work that the organizations are involved in. Besides the work I do plan to involve myself in some sort of social work may it be technical, educational, financial or emotional.

Do your parents understand what it is you are working on?
Yes, especially my father, he is quite interested in technology. He may not have the technical details but he is aware of research and the work I am involved in.

What is the first thing you do when you arrive at the office in the morning?
First thing in the morning is to check and answer my emails. Thereafter, I work by the plan. I always have a plan for the week/month regarding the tasks I need to do. Although sometimes things don’t go by the plan and I have to readjust the plan to meet deadlines.

Do you have proper holidays? Without thinking about your work?
Yes, at least once a year.

Why are so many people afraid of technical sciences?
In my opinion, every individual has a different aptitude to his/her work domain and one should do what one thinks he/she is interested in and can perform best. Having said that, working in the domain of technical science is quite challenging. The field has advanced and it is getting increasingly complex to even gain the basic understanding of different domains. To work in this field, one has to stay up to date. Developing something new involves a minimal margin of error. I think, people are afraid due to the complex nature of the studies that involve an extra bit of hard work, understanding, and patience.