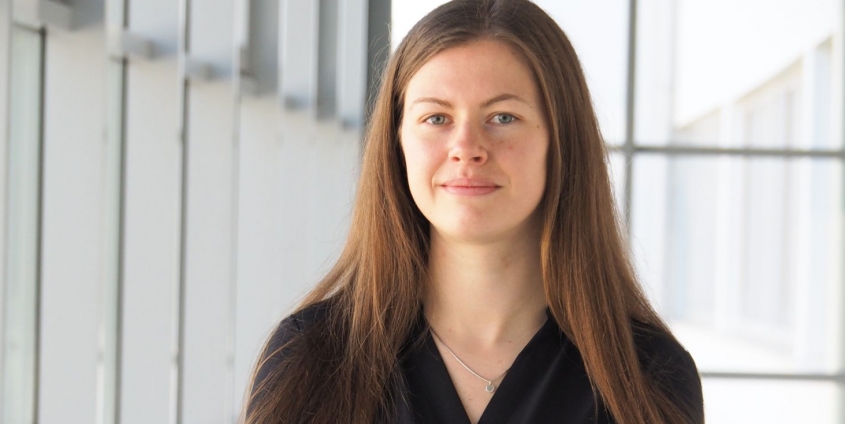 Melanie Siebenhofer likes to delve into complex mental challenges and hunt for the structure that lies behind various problems. The mathematician is currently working on her doctoral thesis which focuses on optimisation.

Her path through life is not a narrow, straight trail, but a wide path with several forks. In fact, it was never Melanie Siebenhofer’s intention to study; instead she wanted to enter the business world immediately after completing her Matura at commercial college HAK Tamsweg. She spent a year in a controlling department and then realised: “I got bored. And there was a sense of sadness that mathematics was no longer truly present in my life.” But Melanie Siebenhofer had no concrete notion of the kind of professional career she could pursue with a degree in mathematics. Partly so that she would not have to choose between mathematics and computer science, she decided to train as a teacher. Gradually it dawned on her: Mathematics is the subject in which she can really flourish. Consequently, she also completed a Bachelor’s degree in mathematics alongside her teacher training qualification. What followed was a year of teaching at school and then a “little nudge”, as she tells us, towards taking up a Master’s degree. She was nominated for the Klagenfurt Scholarship, which supports outstanding students financially and by providing access to a network of companies. “I wouldn’t have gone back to university, if it hadn’t been for the scholarship,” she tells us.

Meanwhile, she is coming to the end of her Master’s degree. Melanie Siebenhofer is currently working on her doctoral thesis at the doc.funds doctoral school “Modeling – Analysis – Optimization of discrete, continuous, and stochastic systems” (funded by the Austrian Science Fund FWF). Her objective is to “determine a good lower bound for a constant in graphs”.  For laypersons, her research topic, which lies in the field of optimisation, can be explained as follows: Let’s imagine a network made up of computers. Every single computer is a node. We refer to the connections between the individual nodes as edges. Melanie Siebenhofer seeks to describe the interrelationships between the individual nodes more accurately than has been possible up to now, in order to allow the modelling of phenomena that were previously difficult to describe in abstract terms. Ultimately, she wants to show that special graphs have good connectivity, i.e. they have few edges, but still ensure that the individual computers are properly connected to each other.

We enquire about Melanie Siebenhofer’s concrete activities in her research work and find out: “I am surrounded by piles of paper. For my Master’s thesis, I drew a lot of graphs and then tried to identify structures.” Precisely this is the particular feature of algorithmic thinking, which the mathematician finds remarkably easy: “I enjoy thinking logically. I love the challenge that lies behind these kinds of brainteasers.” The most rewarding thing about mathematics is the moment when you solve a problem you’ve been working on for a long time: “This also makes up for the tedious phases that precede it.”

At the Department of Mathematics, Melanie Siebenhofer consistently experienced a very supportive environment, as she recounts. She notes that special consideration is given to the role that social gender plays in the careers of students and staff. Melanie Siebenhofer tells us: “ This means that it is not unusual for professors to point out that you are hiding your light under a bushel.” There’s no shortage of female role models in the field of mathematics and statistics in Klagenfurt: Barbara Kaltenbacher, Elena Resmerita and Angelika Wiegele and Michaela Szölgyenyi constitute four researchers with a habilitation (postdoctoral qualification), and of these, Barbara Kaltenbacher and Michaela Szölgyenyi hold professorships. Szölgyenyi is also the project director of the doc.funds doctoral school, where several young researchers are presently working.

As for Melanie Siebenhofer herself, she is open to exploring a variety of other avenues: “We will see what happens after the doctorate. Fortunately, I cover a broad spectrum between mathematics and computer science.”

A few words with … Melanie Siebenhofer

What would you be doing now, if you hadn’t become a scientist?

What’s the first thing you do when you get to the office in the morning?

Because of Corona, I haven’t spent much time at the office. The first thing I do at home is put on some music.

Yes, luckily I’m quite good at that.

I admire all the successful and confident women in science.

Being able to see my colleagues in person again.

Back
The dexterity and delicacy of robots

© goinyk/AdobestockUsing self-awareness to explore the world