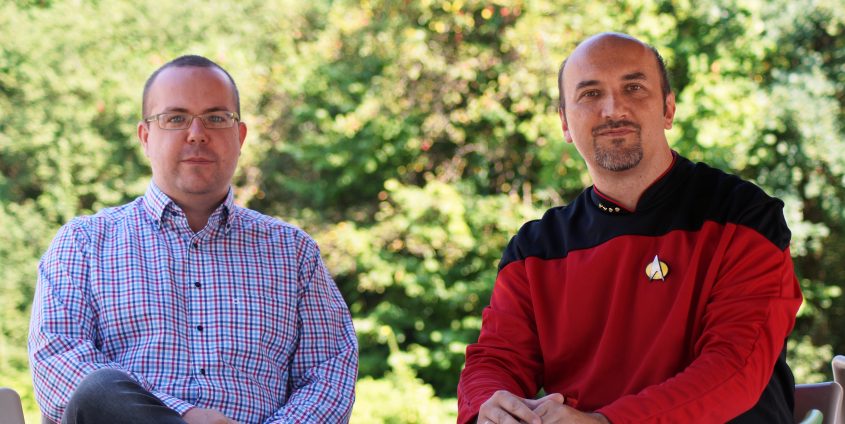 Scientists representing a variety of specialist fields have come together at Alpen-Adria-Universität to explore the Star Trek phenomenon through the lens of their respective discipline. The results included a lecture series with lecture theatres consistently filled to capacity. The edited volume with the title “Set Phasers to Teach! Star Trek in Research and Teaching” was recently published, offering insights into the wealth of perspectives and delivering opportunities for thought-provoking impulses, even for die-hard Trekkies. We joined the co-editors Martin Gabriel (Department of History) and Wilfried Elmenreich (Department of Networked and Embedded System) for an interview. Former AAU staff members Stefan Rabitsch and John NA Brown were subsequently invited to add their statements.

What is Star Trek? Is it a TV series, or is there more to it?

Elmenreich: It is a TV series, first and foremost. It turned into a cultural phenomenon that continues to this day.

How did you personally become a Trekkie?

Elmenreich: As a child watching the early series with Kirk, they were age-appropriate in the simplicity of their structure, and they were appealing. Later, with increasing mental and physical development, I really enjoyed the “Next Generation” episodes, where nothing was straightforward and issues such as space diplomacy or fundamental questions of coexistence were addressed. Star Trek reveals simple approaches to philosophical questions, which I found as stimulating back then as I do today.

Gabriel: I’m a bit younger, which is why I came to it through the episodes of “Next Generation”. In the late 1980s and up to the mid-90s this series was classic afternoon TV on the ORF. Later, “Deep Space Nine” also came along. The first few episodes featuring Kirk certainly had a special vintage patina for me. What fascinated me about the series was the structured nature of the universe in which the stories unfolded, quite unlike other Science Fiction films.

Rabitsch: “First contact” with Star Trek (pun intended) is among the oldest memories I can readily recall. I was exposed to “Star Trek: The Original Series” at the age of four. My friends and I reenacted the adventures of Kirk, Spock and “Bones” in kindergarten. Since then I have gone through different stages of being a Star Trek fan, all of which have led me to meet new people across the globe and tap into new sources of knowledge until I ultimately arrived at the academic stage.

When you perform a Google search for Star Trek and science, you come across a lot of articles on physics, philosophy, politics, ethics, and so on. Scientists seem to have a lot to say here. How do you explain the connection between the TV programme and science?

Elmenreich: The connections exist on many, many levels. I am not only fascinated by technical aspects, but also by questions that address the impacts of technologies: What rights to virtual creatures have? If something is obviously intelligent and it is difficult to tell whether consciousness is simulated, can we simply turn it off? These questions ultimately remain unresolved in science, and the approaches used in the Star Trek episodes may also serve as inspiration for our world.

Is there a particularly high number of Trekkies among scientists? And to what extent is scientific thinking relevant for the Star Trek story?

Which of Star Trek’s predictions are technically feasible today? And what is not yet possible?

Elmenreich: Today, for instance, every supermarket has automatic doors. And our mobile phones are already ahead of the communicators featured in the series. One of the things we are still struggling with is movement through space. The biggest challenge we face is energy. I once calculated that one regular acceleration by the Enterprise would consume more energy reserves than we have for an entire year on Earth.

The Star Trek universe, where the United Federation of Planets endeavours to ensure a (more or less) peaceful coexistence, is regarded as a positive blueprint for society. How was this achieved in the story?

Gabriel: Fundamentally, Star Trek is a utopia, not a dystopia, even though the characters repeatedly stumble into war-like conflicts. The starting point for the further development of human society is a massive world war, a near disaster, which opens people’s eyes. The coming together of humanity on earth and the subsequent union with the other planets is seen as a peaceful solution model.

Returning once more to the question about parallels in the non-fictional world: Are you, as historian, aware of anything like this ever happening in the history of humankind?

Gabriel: No, I do not see this kind of breakthrough, but of course there are obvious parallels to the Second World War and to the founding of the United Nations. Gene Roddenberry invented the story in the 1960s and he was entirely in tune with the tradition of his time with it.

Why does it matter that the author is US American? What is “American” about Star Trek?

Rabitsch: Informed by post-World War II triumphalism, a centrifugal worldview and the typically American sense of mission, Gene Roddenberry initially pitched and sold his TV-show as being little more than a “space western”. Similar to early 1960s Westerns and President Kennedy’s political rhetoric, Star Trek employed the “frontier” as a metaphoric canvas to address and tackle sociocultural issues and questions (e.g. racial conflicts, questions of gender, war, ethical questions, etc.) in allegorical form; that way Roddenberry tried to sneak what were then considered controversial topics past television censors. Staging science-fictional morality plays is the central premise of Star Trek which has allowed it to comment on changing social, cultural and political contexts in the United States and the rest of the world for decades.

Your book bears the subtitle “Star Trek in Research and Teaching”. Can you give us an example of where you can connect to Star Trek in your teaching?

Elmenreich: In the broadest sense, I deal with energy systems. Ideally, my students should learn to estimate certain magnitudes. The following example demonstrates this quite well: The Federation ships are usually brightly illuminated in the series. One might think that this is nonsense, as – being dependent on an autonomous energy source – they need to save energy. My students calculate how much energy is required for the light in relation to the total propulsion and discover that the light consumes a very marginal amount of energy.

And what do you teach with the support of Star Trek?

Gabriel: To give an example, aspects of the frontier myth in American history can be explained very well with the help of Star Trek. I offered a course on this subject once. Other than that, Star Trek is a rich source of anecdotes that serve to add a lighter touch to the lesson.

Rabitsch: For me Star Trek contains the basic tenets of what we are supposed to do as scholars, i.e. to employ critical and cultural thinking skills and to acquire proficiency in historical as well as historiographic literacy so that we are enabled to question and challenge any status quo that is presented to us as such. Star Trek equates human existence with the Kantian basis of critical thinking—sapere aude. In short, working towards and arriving at answers is good but wanting to know is key.

What is next for Star Trek?

Gabriel: The foundation is formed by the roughly 700 episodes that were broadcast from 1965/66 until today. These depict the universe as created by Gene Roddenberry, though he died in the 1990s, and there has been much debate since then about how to incorporate new stories into the story told so far. The potential would still be great today, not least because of the rapidly evolving series format as a whole. The number of stories that could be told would be as endless as the universe itself. After all, each era poses its own questions.

For more than 50 years, Star Trek has been an inspiration to its fans around the world, helping them to imagine a better future. This inspiration has entered our culture and helped to shape much of the technology of the early 21st Century.

The contributors to this volume are researchers and teachers in a wide variety of disciplines; from Astrophysics to Ethnology, from English and History to Medicine and Video Games, and from American Studies to the study of Collective Computing Systems. What the authors have in common is that some version of Star Trek has inspired them, not only in their dreams of what may be, but in the ways in which they work – and teach others to work – here in the real world.

Introduced with references to Star Trek films and television shows, and illustrated with original cartoons, each of the 15 chapters included in this volume provides insights into research and teaching in this range of academic fields. The list of episodes and films is in a series of appendices at the end of the book. 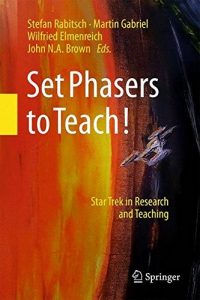 Stefan ‘Steve’ Rabitsch is fixed-term assistant professor in American Studies at the University of Graz and teaches courses in American cultural history at the University of Klagenfurt. A self-declared ‘Academic Trekkie’, he is going to publish his first monograph, Star Trek and the British Age of Sail, with McFarland in 2018. He is co-editor of Fantastic Cities: American Urban Spaces in Science Fiction, Fantasy, and Horror (UP Mississippi, 2018). He is also a founding editorial board member of JAAAS: Journal of the Austrian Association of American Studies. In his endeavors he focuses on American Cultural Studies and Science Fiction Studies across media. His professorial thesis project received the 2018/19 Fulbright Visiting Scholar Grant in American Studies.

Martin Gabriel studied history at the University of Klagenfurt (Austria). He has been a member of the department of history since 2008, and a lecturer in modern history since 2012. His publications and university teaching activities focus on the history of empires (primarily Austria-Hungary, Britain, Spain, and the US), colonial warfare, and social as well as cultural history in the period from c. 1600 to 1890.

Wilfried Elmenreich is professor of Smart Grids at the Institute of Networked and Embedded Systems at the Alpen-Adria-Universität Klagenfurt, Austria. He studied computer science at the Vienna University of Technology, where he received his doctoral degree in 2002 and his venia docendi in the field of computer engineering in 2008. He is editor and author of several books and has published over 150 papers in the field of networked and embedded systems. Elmenreich is senate member of Alpen-Adria-Universität Klagenfurt, Senior Member of IEEE and counselor of the Klagenfurt’s IEEE student branch. His Erdös Number is 3.

John N.A. Brown has worked and lectured around the world, and is currently based in Silicon Valley. He is an inventor, designer, and researcher specializing in Human Factors and the User Experience. His approach to Human-Computer Interaction is based on applying mindful and informed iteration to shape tools that suit human abilities and limitations. After all, we don’t have time to wait for the cross-generational processes of evolution and adaption that naturally make tool use both effective and comfortable. Dr. Brown calls this approach „Anthropology-Based Computing“.