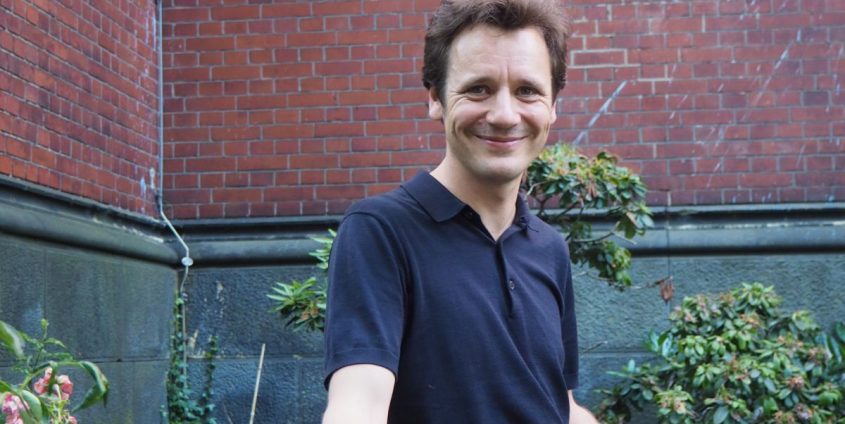 In conversation with Riccardo Krampl, the psychoanalyst from Carinthian Lavanttal talks about his work and life in Berlin where he moved to in 2010 after finishing his studies in Educational Science and Psychology at the Alpen-Adria-Universtität Klagenfurt. And with him pictures from Carinthia.

The joint surgery of the prospective psychoanalyst Riccardo Krampl is located in an unadorned old building with a beautiful interior in Berlin Schöneberg. Krampl’s room is spartanly furnished with grey and brown furniture from the 1950s and 60s: a sofa, a small table, a secretary, two chairs and some art prints. When children come, the room is converted. Painting materials and games are hidden in a wall cupboard behind a supposed passage door. The double doors are opened, a serving trolley is pushed in and the small table is moved forward. The room is thus transformed into a children’s (therapy) room. This classic analysis setting is important for the analyst. He wants the environment to be as sober as possible and to have a fine colour coordination because it has a calming effect. Nothing is left to chance. Next to a beautiful white tiled stove leans a landscape by Giselbert Hoke, the painter who painted the frescoes in the main station of Klagenfurt. A reprise of a catalogue of the painter, which Krampl got from his parents. In the centre of the room hangs an original-sized reproduction of the “Yellow City” by Egon Schiele: “An unfinished painting, like psychoanalysis, is never quite finished,” says Riccardo Krampl, who greatly appreciates the Schiele series of Krumau paintings. But his favourite painter is Werner Berg. Besides an original woodcut by Berg, an oil painting (as a reprint) shows a listening man in a train compartment. As a therapist he sits under this picture at the head end of the couch and listens – just like Berg’s “Mann im Coupe” – to the patients’ stories, says Krampl.

Why did you choose Berlin as your training location?

These are the possibilities that Berlin offers. After studying psychology at the AAU, it was pretty clear to me that I was going to train as an analyst, even though I then worked in an SOS Children’s Village for a few years. I did not go to Berlin until 2010. In Austria there is also training, but the opportunities are limited. In Berlin there are two dozen psychoanalytic training centres as well as the internationally leading Charité and the IPU, the International Psychoanalytic University Berlin. So, the buffet is abundantly covered! That was an important motivation for the change of location.

But you could have also stayed in Austria?

Yes, Vienna and Graz were already under discussion, but I was also attracted by the cultural exchange between Austria and Germany.

How does analytical training differ between Austria and Berlin?

In Germany psychoanalysis (PA) is covered by insurance. PA has a more classical clinical approach, while in Austria it is more cultural. Possibly through Freud’s legacy, but in Germany it is already very much bound to the clinical setting, to the clinic in general. Here only doctors and psychologists are allowed to do the training, in Austria other professional groups can also receive training through a propaedeutic course. This automatically means that PA is less clinically oriented. I am quite advanced in my training and am already treating patients. My aim is to work independently as a psychoanalyst as contracted provider. But I would also like to continue working in the clinic, as I like to work in a team. As an analyst you work alone in a two-person relationship with a patient.

Who are your clients?

I treat children, adolescents and adults here and do two specialisations in parallel: analytical child and adolescent training and training as a psychoanalyst. This is possible side by side, but of course it is very complex and demanding.

What do you do after a day at work in Berlin?

Going for a swim! At one of the many lakes in Berlin or its surroundings. The nearest lake is only ten minutes away from the flat. In Brandenburg you can reach clear water lakes in 20 minutes by car. I like the fact that you can see your toes in the water – just like at Wörthersee.

Do you also visit museums?

Often and with pleasure. There is an annual museum pass for all public museums at a very reasonable price. The Neues Museum is highly recommendable. It was quite badly damaged during World War II. It is located on the east side of the Museumsinsel. It was not rebuilt during the GDR times, but left as it was. David Chipperfield rebuilt it after 1997 with all its scars, without reconstructing them. You can see where it was damaged and where the old substance is. I find that interesting as a symbol of culture. One sees the decay of culture. You can see how fragile culture actually is, how quickly culture can be destroyed. This house symbolizes this decay of culture in a striking way. At the moment, Berlin is following the trend of reconstruction. All that remains is a beautiful façade. For example, the Berlin Palace. On the inside it will house the Humboldt Forum.

You were born and grew up in Carinthia. Should Berlin now remain the centre of your life?

Yes, that is the plan. I live here very nicely, the practice in Schönefeld is well located, I feel very good here. But it took a long time before I felt at home here. Carinthia was very present in my dreams for a very long time. It took a long time to create such an inner image of Berlin that now feels good. It has quality.

How can Berlin be described?

It is wonderfully green, in summer with the lakes wonderful. There is always a bit of improvisation, but I like that. Sometimes the city is rough and aggressive. That can also be good. There is a constant movement within it, a movement forward. That suits me. Berlin is constantly changing. Capital is back again, housing is scarce. But that is part of a growing city.

They say that every Berliner has a migration background. That is why there is a different understanding of migration here.

This is still noticeable in many people. My partner was born in the GDR. She was four years old when the Wall came down. She was still socialised in the image of socialism, i.e. in the East. But that will have disappeared in the next generation. Berliners are known for their openness. The Berliners are less restrained. You stand at a traffic light, and in that moment a conversation can start right away. This also reminds me of the open interaction way in Carinthia.

Learning about and from video games