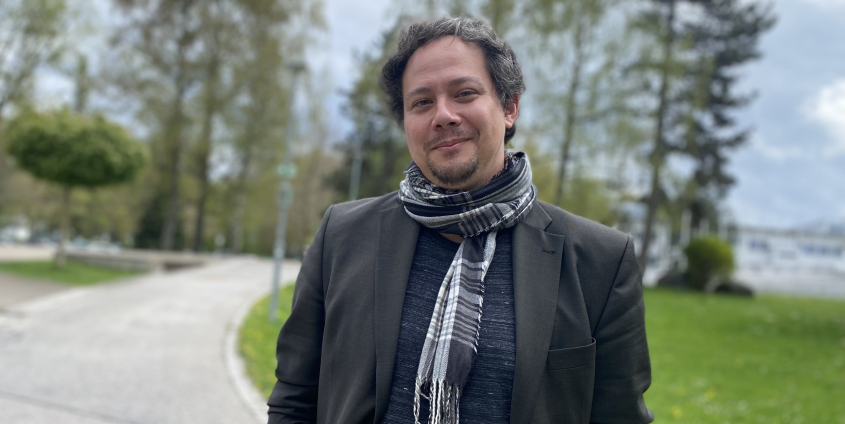 Public service broadcasting has a statutory mandate. This includes a certain level of diversity in its programming. The shift to digital formats combined with the use of recommender systems can jeopardise this diversity. Can a recommender system tuned for diversity step in and recommend alternatives? Nikolaus Poechhacker is a researcher and lecturer who works in the research group “Digital Culture” at the Digital Age Research Center (D!ARC). He focuses on the interface between society, law and technology.

“I am interested in understanding how the practical implementation of digital systems changes social institutions,” Nikolaus Poechhacker explains. His PhD thesis discusses the example of the development of a recommender system for public broadcasters. The high degree of complexity at the interface of technology, society and law is particularly challenging: “It is not enough just to be able to implement something technically. In this example, you also have to have the challenge to operationalise diversity in such a way that it can mediate between different social groups.” The digitalisation of asylum procedures, for example, which uses voice recognition software to determine where applicants come from, is similarly complex and should be viewed critically. Nikolaus Poechhacker mentions another example, with work done by Prof. Tina Ehrke-Rabel from the University of Graz: The tax audits carried out by the tax office have also become highly automated. Often, an algorithm decides who is audited: “The patterns are very subtle. For a long time, you’re not on their radar. But once you are selected for an audit, you won’t be able to get out of it for ages.” As we question whether this might perhaps be unfair, a smiling Nikolaus Poechhacker informs us: “It’s not unfair, because you don’t have a right not to be audited.”

Poechhacker studied sociology in Vienna, took courses in computer science at the same time and completed his Master’s degree in “Science-Technology-Society”. He headed to the TU Munich for his doctoral studies. After spending almost two years as a sociologist specialising in law and technology at the Department of Public Law and Political Science at the University of Graz, Nikolaus Poechhacker joined D!ARC as a Senior Scientist in early 2022.

“We have little awareness of the technologies used by state institutions and the impact this has on us,” he explains. When court decisions are influenced by algorithms, as is already happening in the US in some cases, everyone should be aware of this. “For sensitive, public areas, we need more transparency. In comparison, I don’t need much transparency regarding the algorithm that recommends shows to me on the streaming platform.” Poechhacker believes that the younger generation has a high level of digital literacy, especially when it comes to frequently used platforms: “We see this with YouTube. ‘Like us, because it helps us with the algorithm,’ is a common phrase there.” But who needs to know what is happening on the practical platforms that shape our everyday lives: “In the case of search engines, transparency would have the opposite effect; everyone would try to manipulate the rankings in their own interest. So, it’s not just about transparency for the general public, but rather in relation to governance mechanisms, for instance, with regard to a regulatory body.”

Nikolaus Poechhacker’s field of research is expanding daily, as more and more technical systems are shaping our everyday lives and thus also the administration and organisation of the state. „”There is a lot we don’t yet understand, and it’s worth asking unsolved questions – including the area of basic research” he concludes.

A few words with … Nikolaus Poechhacker

What motivates you to work in science?

The freedom to learn new things time and again. I enjoy working at the interface of different disciplines because I am regularly confronted with something entirely new.

Do your parents understand your work?

That depends greatly on the level of detail.  But using case studies, I can explain fairly well why I am interested in this and what it means on a global scale.

What’s the first thing you do in the morning?

Well, I certainly try. But I don’t quite manage it. On holiday, you usually have plenty of time to catch up on reading all the books you’ve acquired.

Inaccuracies. And when people only seek counter-arguments in a discussion instead of reasoning with a person.

Chocolate milk. Combined with a bit of existentialist philosophy.

That is a very tough question. There are many scholars who have had a lasting influence on me. In general, I admire people who are able to critically examine their own thinking. And, of course, there are all the people with whom I have had and still have the pleasure of working.

Of being ‘done’ at some point. And clowns.

Many things. The next concert. The next beer with friends. And especially my little cousins’ graduation ceremonies (which are still some way off).