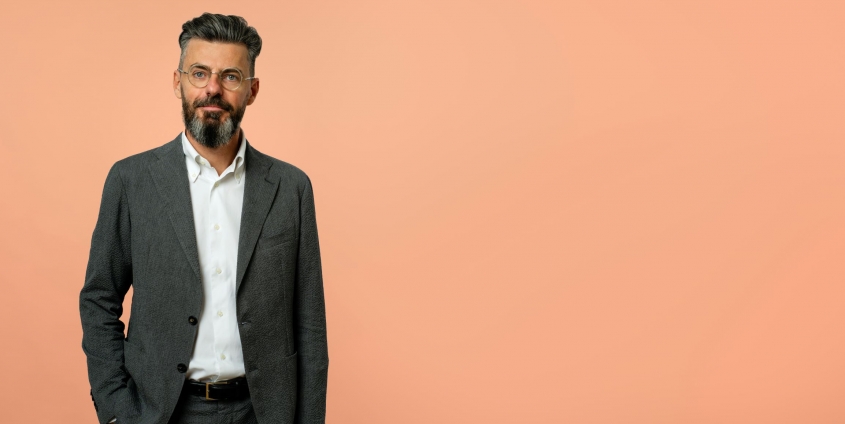 Bottom-up and top-down: Blending the methodological approaches of two scientific communities, Andrea Tonello and his team at the Institute of Networked and Embedded Systems are creating powerful new tools that will contribute to providing novel forms of communication in the future.

Andrea Tonello, Professor for Embedded Communication Systems, is enthusiastic when reflecting on his work on wireless, wireline and power line communication or signal processing. In his dual role as scientist and teacher, he is passionate about exchanging ideas and feedback, taking great pleasure in encountering stimulating views in unexpected places while on his travels.

Driven by his curiosity about the fundamental human need for communication, he earned his doctor of engineering degree in electronics, swiftly followed by a doctorate in telecommunications engineering. Natural sciences, particularly mathematics and physics, play an essential role in Tonello’s work. Traveling from person to person, information must traverse a communication medium. Whatever form the channel takes, on its journey the information is subject to rules imposed by nature. Understanding these rules and their effects by observing physical quantities and interactions requires a tremendous learning effort and a rigorous bottom-up approach.

The novelty of the methodology lies in combining this perspective with the top-down phenomenological observations conducted by computer scientists. Having successfully blended their respective approaches, these two methodological communities have now coalesced, resulting in a paradigm shift and producing what Tonello describes as a novel epistemology.

Tonello uses power line communication (PLC) for the purpose of illustration. Though the idea underpinning PLC has been around for some time, notable progress has been made in recent  years with the emergence of statistical analysis and machine learning. Aided by these artificial intelligence tools and by the skilled formulation of fundamental questions, researchers including Tonello and his colleagues have significantly advanced the understanding of the mechanisms of signal propagation involved in transmitting information over existing power lines.

In terms of methodology, scholars identify the system and its inherent rules, and apply a model-based design to map the system topology, allowing them to predict and manage the propagation of information bearing signals. Having analysed the propagation, they draw on their mathematical expertise to develop algorithms and protocols to improve the transmission performance. The mathematical models are implemented in computer simulations to test new algorithms and protocols. This can be very rewarding, as Tonello explains, not only providing scholars with experimental validation but also furnishing mathematical proof of their research results.

PLC involves two separate signals: electricity is transmitted at low frequency, while the communication signals travel at high frequency. Irrespective of whether the communication comprises voice, video, a database or an image, the information starts its journey as bits. To propagate through power lines, these bits are converted into electromagnetic signals and are ultimately recovered by a receiver at the end of their journey. However, the transmission may be affected by noise, by distortions or material damage to a cable, all of which can have a severe effect.

Tonello and his team are working on technology that monitors the status of the power grid and detects anomalies which could potentially lead to faults. Though large-scale blackouts are rare, resilience, reliability and safety are extremely important, because this is a critical infrastructure.

Proposals of this kind offer numerous advantages, not least for less developed countries, as they address both technological and social issues including environmental sustainability, ubiquitous distribution, and the democratisation of information, thus allowing us a tantalising glimpse of the future of communication.

Back
library’s opening hours during the semester break 2020

bitmovinBitmovin’s journey to the “North Star”