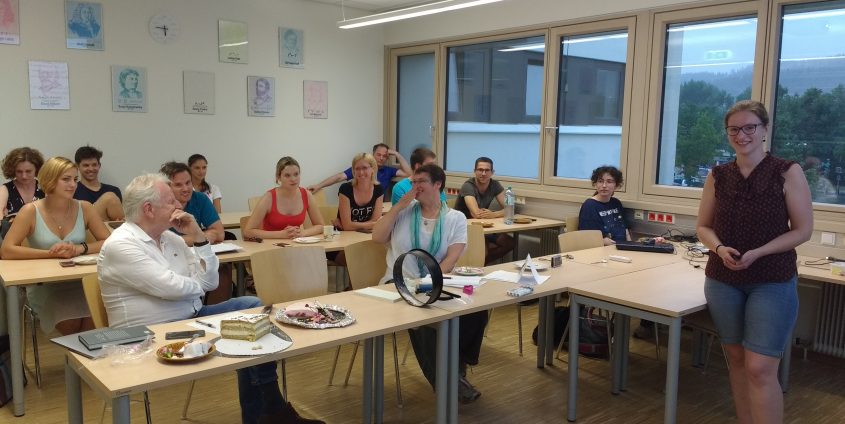 The distinguished mathematician Bruno Buchberger was a key note speaker in the workshop “Mind, Culture and Behavior in the Digital Age” conducted in Klagenfurt last week. Despite his busy schedule, he accepted Susan Margulies’ invitation to attend the last day of her class, and listen to the students present their final projects.

Groebner Bases (discovered by Buchberger, but named after his thesis advisor Wolfgang Groebner) and Buchberger’s Algorithm were principal topics in the course “Algebraic Methods for Discrete Optimization”. The final student presentations included topics such as “Improvements to Buchberger’s Algorithm”, “Set Cover and Groebner Bases”, “Hamiltonian Cycle and Groebner bases”, and “A Bridge between the Ideal World and the SDP World”.

Despite the pressure of the unexpected visit of the mathematician whose name appeared at least once in every presentation, the students rose admirably to the challenge. They were poised and clear as they delivered their talks, and Buchberger was amazed by the lively, goal-oriented group of students. He also congratulated their professor by saying “A lively group of students means a lively professor”. He emphasized the importance of personal contact between teachers and students, and pointed out the personal importance to him of Emmy Noether’s portrait hanging on the wall. Emmy Noether was Wolfgang Groebner’s advisor, and Wolfgang Groebner was Buchberger’s advisor, and now Buchberger himself was sitting in a room with Emmy Noether’s picture, listening to talks on Groebner bases, thus demonstrating the student/professor relationship stretching back into history. He also commented on the gender balance in this course: 50/50 at last!

Buchberger encouraged students to pursue their goals, and reminded them that despite the tremendous advances of computers, natural intelligence will never be replaced by artificial intelligence. He also spontaneous outlined a talk on the back of a napkin, and gave the students a short lecture on the “mathematical creativity spiral” and the relationship between computational experiments, conjectures, theorems, and algorithmic improvements… and repeat!

Both students and teacher were extremely honored by the gift of Buchberger’s time and attentiveness, and very appreciative of his motivating and inspiring words.

“Thank you for enlightening Austrian Math students”, Buchberger wrote into the copy of his book that he presented to Susan at the conclusion of the class.

The AAU Math students have clearly benefited a lot from both Susan’s class and Buchberger’s visit! 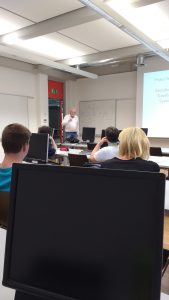 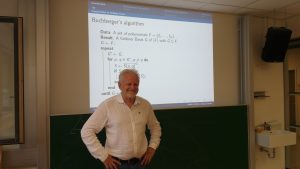 Many routes lead to an overview image: Path planning for drone swarms