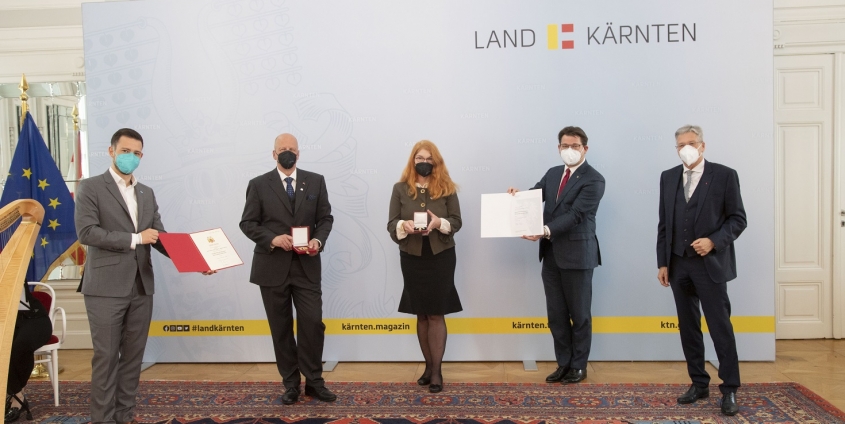 Up until October 2020, Friederike Wall and Martin Hitz acted as vice rectors at the University of Klagenfurt. On 21 April 2021, they were honoured for their achievements by Carinthian Governor Peter Kaiser in a ceremony in the Hall of Mirrors in the Carinthian Government buildings.

Friederike Wall (born 1964) has been professor for Management Control and Strategic Management at the University of Klagenfurt since April 2009. As of April 2010, she officiated as Vice Rector for Research, and in 2012, following the dismissal of the Rector at the time, she took over the role of Interim Rector for six months. As Vice Rector for Research, Friederike Wall heralded a paradigm shift and was the main driver for the university’s successful transformation into a research-intensive institution. In her role as Vice Rector, she systematically, consistently, and sustainably contributed to creating a conducive environment for enabling junior scientists to reach their full potential in terms of a pronounced culture of competition and excellence. At the same time, Friederike Wall remained committed to her own research and teaching. For instance, she was admitted to the Academia Europaea in 2013. Moreover, she is a Scientific Board Member in the Austrian Research Association (Österreichische Forschungsgemeinschaft, ÖFG), as well as a delegate of the Austrian Science Fund (FWF).

Until October 2020, Martin Hitz (born 1959) served in high management positions at the University of Klagenfurt for 20 consecutive years: as Vice Rector (with various responsibilities), founding representative of the Faculty of Technical Sciences and Dean of this faculty. For more than 13 years, he acted as Vice Rector and after the death of the former Rector, he took over the role of Interim Rector for six months in 2005/2006. Martin Hitz played a crucial role in establishing and developing the Faculty of Technical Sciences in Klagenfurt, which is today a key contributor to the university’s major achievements. During his mandate as Vice Rector for Human Resources (2012-2020), he was responsible for the re-organisation of the Vienna and Graz campuses as well as the comprehensive renovations of the Klagenfurt campus while maintaining full operations. Most recently, Martin Hitz calmly and thoughtfully steered the university through the first period of the pandemic. Martin Hitz continues to serve as Professor for Interactive Systems at the Department of Informatics Systems. In 2017, Martin Hitz received the highest federal recognition awarded to a Vice Rector, the Grand Silver Decoration of Honour for Services to the Republic of Austria.

Governor Peter Kaiser presented Friederike Wall with the Austrian Cross of Honour for Science and Art, First Class, and Martin Hitz with the Carinthian Decoration of Honour for Science, and paid tribute to their work: “We can only meet in small numbers, but with all the greater appreciation and gratitude we are able to award these decorations today and honour the outstanding achievements and work of the honourees, and bring Arts and Science to the fore. These Decorations demonstrate their achievements for the region, for arts, for science, and for Austria.”

“Services to science and/or art which are in the interest of Austria and are extraordinary in their significance and impact and have attracted public attention in a special way” are the prerequisites for receiving the Austrian Cross of Honour for Science and Art, First Class. The Carinthian Decoration of Honour is awarded to those who have rendered outstanding services to the Province of Carinthia.