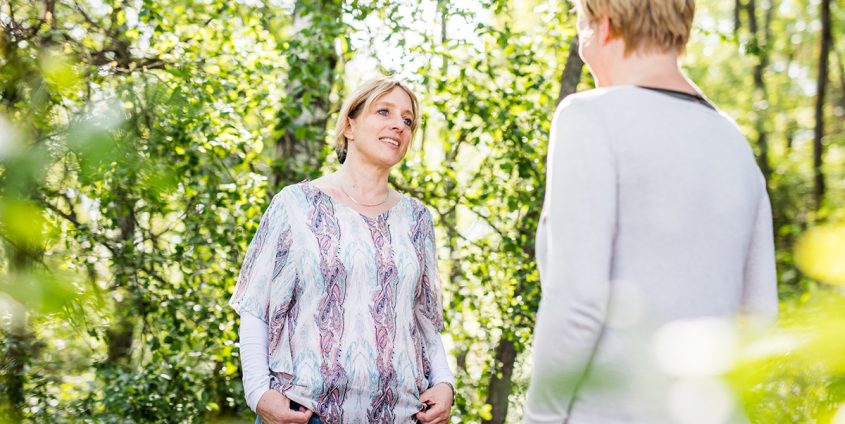 Geographer Kirsten von Elverfeldt argues the case for giving greater consideration to uncertainties in the scientific approach to the environment and its transition. She has taken a close look at natural phenomena featuring the concept of so-called self-organising systems, where the long-term development is difficult or even impossible to predict. In an interview with ad astra she explains what defines these systems and why tolerating uncertainties can be worthwhile.

What usually draws our attention in studies on environment and climate change is the “cause-effect principle”. What you are setting out to do is to challenge these interrelations or, more specifically, to introduce an additional dimension. Why?
My starting point is the premise that it is not always the case that external factors lead to a change in a system, but rather that the system itself can also produce change. In contrast to this, in traditional cause-effect thinking, to give you an example, climate change can be said to produce an exogenous influence on a river such as the Danube, in the sense that an increase in the occurrence of heavy rainfalls leads to an increase in flooding events. Consequently, we assume that if one changes, the other will also change in a particular way. In science, this mutual referencing works frequently, but not in every instance. My focus is on the cases where it doesn’t function.

Can you name some examples?
Small-scale phenomena, in particular, are a useful source of examples: Stone circles in permafrost regions, i.e. in permanently frozen soil, reveal a certain pattern, and this is not the result of exogenous influences, but the pattern produces itself, so to speak. Or, let’s take the beach cusps – the arcs that form in the sand on a beach: There is a theory that these arcs form in a self-organised manner, and are not dictated by the structure of the beach, the swell of the sea, or other exogenous factors. I find these types of phenomena fascinating.

How would you explain self-organisation based on this?
Ultimately, the starting points are coincidences, such as irregularities on the sea bed. These lead to the fact that material is more likely to be carried away from some areas, which lie slightly lower, as water can flow more rapidly there. Elsewhere, there are areas which are slightly more elevated, where the water flows more slowly and deposits are more likely to form. Over time, little “valleys” and “mountains” take shape and grow further, as the water flows with either more or less speed, shifting the particles around.  The process amplifies itself until it reaches a certain critical threshold, at which point negative feedback sets in and puts a stop to the process. In other words, following a self-amplifying process, randomly distributed irregularities underground lead to the formation of beach cusps.

Are there any large-scale natural phenomena, which can be described using the concept of self-organisation?
Yes, some medium-sized systems do exist. One example I find intriguing are river deltas: At the very moment when the river reaches the ocean or a vast lake, the flow velocity drops due to the resistance of the water. The consequence is a deposit of material, sedimentation, first of coarse grains, and then of increasingly fine particles. The process continues and irregularities arise, which subsequently form the separate arms of the delta which, in turn, develop in line with the same principles. As time goes on, this arm or that arm may become blocked, and the water seeks out another route. The process works entirely by itself. Up to a certain degree, exogenous factors do not exert any influence. Only once there is a significant change in the parameters, for example due to a rise in the sea level or if a dam is constructed somewhere along the course of the river, there will also be effects on the development of the delta.

Is there sufficient research focusing on these phenomena?
In relation to many phenomena, literature is rather scarce; one area that attracts a greater number of studies is that of salt marshes, which are also widely regarded as self-organising systems, with relevant literature specifically referring to this concept.

Is everything that forms a structure self-organised?
No, not every structure can be regarded as self-organised. It all revolves around the internal process of a system, which can be understood as “self”. The processes occur locally, without external influences.

Humans often observe nature guided by a need to detect an underlying order to the structures in order to be able to infer future developments. Do self-organising systems allow this approach?
Short-term developments can be predicted, but not the long-term kind.
Self-organising systems are non-linear. When I look closely at large systems, and they don’t even have to be especially complicated, there are very many parameters which affect each other: Wherever you look, something is happening, and usually all at the same time. So, while we are measuring and observing at one location, something is also happening at another location. Systems move towards certain states, so-called attractors, which we do not fully understand yet. In this context, science very quickly reaches its limits. Events occur, which nobody has reckoned with. This is also an important point for me: Science is expected to deliver certainty, and my work points in the opposite direction, towards uncertainty in forecasts.

If we are uncertain in relation to how small systems like beach cusps develop, then how can we make predictions about the ongoing development in terms of the big picture, of all that surrounds us? Is it actually the case that we don’t really know how the environment will continue to change?
Certainly, there are some indications. Luckily, we have the opportunity to study past climates and to draw our conclusions. But here, too, there are uncertainty factors: We can only see what is available to us in the form of contemporary testimonies from the past. We also have models we can use to calculate, but these contain uncertainties, too. We do have a lot of knowledge, but my personal belief is that we can never know everything. This serves as a guarantee that science will never run out of material to work with.

Climate change and the consequences for the human species are often accompanied by the demand for human-made countermeasures.
Society’s need to control the environment is considerable. Everything seems possible: from regulated peak discharge values for large rivers all the way to managed precipitation through “cloud injections”. I would like to challenge this notion of feasibility: Is it even possible to achieve permanent control over natural systems which defy a complete understanding simply on the basis of their complexity? If we accept that these systems are complex and react to the exertion of influence in a non-linear manner, then one and the same effort to exert control can have entirely different effects at different moments in time. Thus, the consequences of these kinds of attempts to influence can barely be predicted.

Is it possible to apply the concept of self-organisation in order to comprehend the Earth in its entirety?
This has not really been thought through properly. Personally, I can imagine thinking of the overall system Earth as a self-organised system. We can see a great number of structures that cannot be explained with external factors, which may be an indication.

What would this mean for Geography as Earth Systems Science?
Science always asks why. This perpetual search for cause and effect is crumbling away slightly at the moment. This is not the first time this has happened: After all, the principle of causality was proposed by Bertrand Russell as far back as one hundred years ago. I feel it is important to use self-organisation to point to the uncertainties on the one hand, and to trigger a change of view on the other hand. For the field of Geomorphology, the study of landforms, the latter focuses less on studying the outer trappings, and instead looks closely at the system itself. To date, this has rarely been at the centre of attention: Which processes are taking place, how do they interact, what information does the system carry within itself, and how does it process this information? The example of the glaciers allows us to demonstrate that they respond sluggishly to climate change. Five warm years might not become measureable at the mouth of the glacier until 15 years later, or never, as the case may be. With block glaciers, which are a permafrost phenomenon, it can take hundreds and thousands of years. Here, a look at the inner workings of the system promises particular merit.

When we are talking about the Earth as our personal living environment and, as such, about survival in a changing environment, uncertainty is difficult to bear. How can science address this?
When catastrophes occur, explanations help us to process what has happened. It is vital, however, that science adopts an open approach to uncertainties. It should not raise false hopes. There is much we do not know, and we can only follow the path of the theories which seem most plausible. The problem arises with the attempt to present these theories as truths. Let’s consider the example of the theories on anthropogenic or natural climate change, which are dealt with as opposite poles. The topic makes for good publicity, which means that many, particularly those outside of the scientific community, defend their positions vociferously. It often feels as though there is something akin to a “religious war” being fought between the two poles in science. However, the difference between religion and science is that religion promises truth, while science searches for truth by proposing theories that need to be discussed.

In other words, the case you make is that uncertainties should be endured?
Indeed, and on every level: In science, in society, in politics. In all areas, not just in relation to the environment and climate issue. It works very well in other fields of science, which draw less attention in terms of publicity, for example in astronomy, where many issues, up to and including the theory of relativity, are currently being challenged.

Does the concept of self-organisation help you to think in terms of uncertainties?
I find that it helps me personally, but others dislike the concept for the very same reason. For me, science is especially fascinating in areas that are, as yet, unknown. Today, we do not know how self-organising systems will develop in the long term, but maybe we will understand it better in 20 years’ time.

Kirsten von Elverfeldt works as Postdoc Assistant at the Department of Geography and Regional Studies.

She studied Geography, Meteorology and Soil Science in Bonn and Cork and has held academic positions at the Katholieke Universiteit Leuven in Belgium, at Bonn University and at Vienna University. She earned her doctorate on the subject of “Systems Theory in Geomorphology. Challenges, Epistemological Consequences and Practical Implications” and her work was honoured, amongst other awards, with the Dissertation Prize of the German Working Group for Geomorphology.