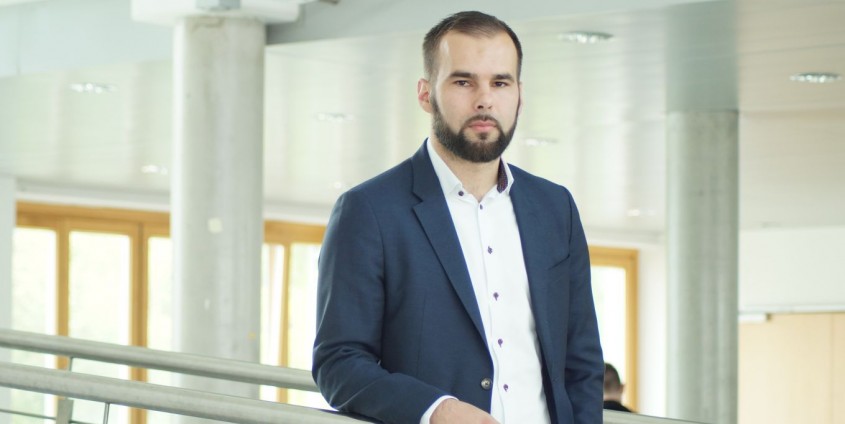 Risk management instruments could prevent many so-called undesirable events in hospitals. However, for these tools to work efficiently, a safety culture is required, which needs to be introduced and implemented gradually. Šehad Draganović is investigating how this might be achieved.

Šehad Draganović attends the hospital with a feeling of confidence whenever he needs medical assistance. And he does so even though – globally – one in 1,000 hospital patients dies as a result of a so-called undesirable event. “It is always a possibility. But Austria has a good health system. I know this, because I have taken a close look at other systems, too. As long as humans work in hospitals, it will always be somebody’s fate to become the victim of a mistake.” However, as the management expert who specialises in health management, patient safety, change and risk management is keen to point out, much can be done to reduce the potential hazards.

In this context, a cultural change in the health system will be absolutely elementary. Studies have shown that, if the senior consultant disinfects her hands when doing rounds, her colleagues will follow her example. However, according to Draganović, a cultural change requires ten to twenty years to take hold. “And it won’t happen at all, if it isn’t tackled systematically.” As part of the research required for his doctoral thesis (supervised by Guido Offermanns), Šehad Draganović has conducted several studies, seeking to understand the safety culture and the effectiveness of risk management instruments.

Risk management in hospitals since 1999

Not quite twenty years ago, the study “To Err is Human: Building a Safer Health System” was published in the USA. According to this study, between 44,000 and 98,000 people die in hospitals every year, as a consequence of an undesirable event. The study gave rise to a new awareness of risk management in the health system. Today we know that approximately 5 to 12 per cent of all patients fall victim to an undesirable event, such as a mix-up of medication or a preventable infection caused by poor hand hygiene, for instance. In almost all cases the complications are treatable; but if the wrong kidney is removed by accident, the results can be fatal.

“Until 1999, it was commonly believed that hospital errors were unavoidable. Then scientists started to find solutions for risk management”, Draganović explains. They used examples from the aviation or the nuclear industry as role models. One of these was the use of checklists: Prior to the operation, patient data, allergies, symptoms, etc. have to be checked, and immediately before the incision all instruments in the operating theatre must be counted, so the number can be cross-checked after the surgery is concluded. All in all, the total time required for each checklist should amount to three minutes.

Do people really do this?

The studies carried out by Šehad Draganović have revealed that the introduction of this type of checklist does not automatically mean that it works effectively. This is because, “the checklists are completed digitally nowadays. And it is a simple matter to determine that many people tick the items on the lists after the operation.” For this reason, Draganović believes that it is essential that risk management instruments are not deployed in an organisation by using a top-down mechanism, but rather that all concerned parties understand the benefits – both for the patients and for the health care professionals themselves, who are often faced with the threat of legal action. According to the results of a survey he conducted with 32 health professionals in AUVA institutions, “employees must become stakeholders”.

In the past, if someone worked at a hospital and made a mistake, and then confessed to this mistake, that person was punished, even though he or she may not have been the root cause of the mistake. In contrast to this, the pioneer USA has long pursued a safety culture, which focuses on finding the source of the error. This requires other types of error reporting cultures: “All hospital personnel should have the opportunity to report dangerous situations anonymously. A team should then investigate these reports promptly, and initiate solutions.” Following this approach, Swiss hospitals have successfully replaced glass bottles with plastic containers. If one of these is dropped, it does not shatter. Fewer people slip and fall or receive cuts from glass shards.

A question of time

Everyday hospital routines are hectic. Often, Draganović reports, the time factor is used to argue against risk management instruments. The example of patient transfers, which are often the source of undesirable events, can be used to illustrate that the opposite is often true: “Many patients are ‘transferred’ next to the coffee machine at the point of the shift change. Clearly, the patient’s state of health is not going to be the main topic of conversation here and essential information can get lost. To prevent these types of transfers, we need scientifically proven instruments that are both effective and efficient.”  A transfer checklist has now been developed, which helps to prevent roughly half of the associated undesirable events. And, as far as the time issue is concerned: “The average patient transfer next to the coffee machine takes 2.5 minutes; completing the checklist takes 2.4 minutes.”

Measuring the culture of safety

The key to moving towards an efficient safety culture is knowledge and training, as well as systematic implementation in organisations. “The more health professionals understand that risk management instruments can contribute to significantly lowering complication and mortality rates, the more likely the integration of measures in the daily hospital routine and in the culture.” Benefits emerge on several levels, not least on the level of costs, as “costs in the health system decline, when quality increases”. Ultimately, as Draganović says, when our health is at stake, everything is at stake.

Šehad Draganović is a senior scientist at the Department of Human Resource Management, Leadership and Organizational Behavior at the AAU. He aims to complete his doctoral thesis on “Measurement and Development of a Patient Safety Culture in the Management Context – Qualitative and Quantitative Studies from Austria and Bosnia & Herzegovina” by October 2017.

Back
A look at power lines that transport data