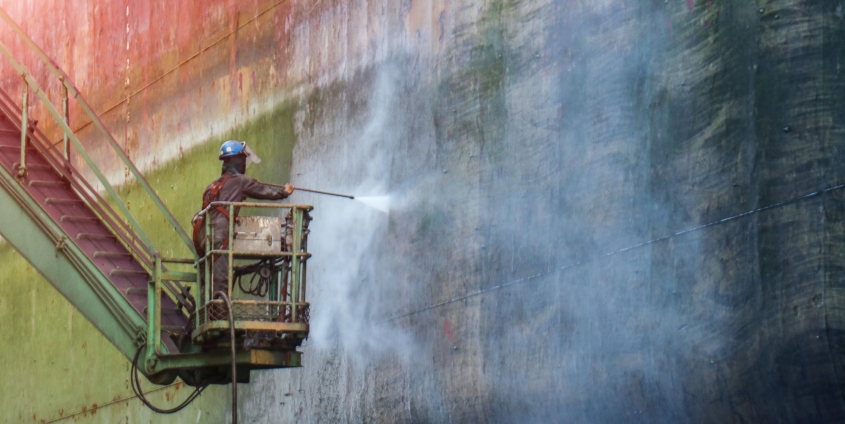 Cleaning a ship’s hull currently takes around eight days and costs between 100,000 and 200,000 Euros.  A research team that includes Stephan Weiss and Jan Steinbrener from the Department of Smart Systems Technologies aims to use autonomous robots for this task.

An estimated 56,000 ships, each weighing more than 500 tonnes, are sailing the world’s oceans. In the process, they are exposed to considerable levels of contamination: First, algae settle on the hulls and subsequently these form a fertile substrate for barnacles. The longer one delays the cleaning, the larger the elements that adhere to the surface. This in turn intensifies the resistance to which the ship is subjected as it moves, and fuel consumption and exhaust gases increase significantly. Autonomous hull cleaning and inspection could deliver several advantages: “Cleaning could be carried out more frequently, thus saving time and fuel in addition to protecting the environment. It should be possible to perform automated cleaning while a vessel is being loaded”, Stephan Weiss, who primarily works in drone research, tells us. A further advantage could be that autonomous robots can make “objective” decisions, while a human inspector has to use a visual estimate to judge whether a crack might be a cause for concern or not, or whether a certain level of contamination is still acceptable. In addition to achieving financial savings, the environmental effects are also remarkable: Cleaner ships typically consume between 5 and 10 per cent less fuel, and in extreme cases this figure may even reach 30 per cent.

So what do drones have to do with the cleaning of ship hulls? Stephan Weiss elaborates: “The idea is for drones to fly around the outside of a ship to comprehensively survey the entire hull. This will require several mini-helicopters, because the flight time of a drone is usually limited to anything from a few minutes to half an hour. The recorded images have to be combined to form an overall view. Next, magnetic crawlers on the vessel will be used to carry out the actual inspection and cleaning work. For this, we will need different robots to work above water and under water.” Cooperation between the different types of robots will be key to achieving this. The task is further complicated by the fact that it doesn’t only involve the inspection and cleaning within different environments, but also requires different treatments for different surface materials. This is where Stephan Weiss and Jan Steinbrener would like to share the expertise of their “Control of Networked Systems (CNS)” group: “We need methods that basically localise mobile robots, albeit with different devices, sensors and in different environments,” the two scientists agree.

“One of the big challenges we face is the shallow texture depth and smooth surface of the hull, both of which impede precise navigation.”
(Stephan Weiss)

The robots must be able to cooperate with each other: The drones will feed their images to the crawlers, because the crawlers – operating on the surface of the respective ship‘s hull – can’t be equipped with GPS for navigation purposes, but still need an overview of where they are at any given moment. Stephan Weiss adds: “One of the big challenges we face is the shallow texture depth and smooth surface of the hull, both of which impede precise navigation.” Expertise on cooperation between the drones, and especially on collaborative state estimation and navigation of these robots, can be contributed by the Klagenfurt team.

The team has recently presented some initial methods for this, allowing collaboration with several sensors. The first experiment recently took place in the drone hall at the University of Klagenfurt. Stephan Weiss reports: “Our project partners from RWTH Aachen used their virtual goggles to pilot drones in our drone hall. We simulated a ship on a scale of 1:10 and sent the images, as well as the real position of the drone, to the team in Aachen, who then reproduced it in the virtual world.“ One of the aims of the project is to ensure that the experts responsible for handling the autonomous inspection and maintenance do not need to be based in the harbour itself, but can work off-site. We ask whether shipping companies are willing to donate costly shipping hours for the purpose of experimental research in real ports, and we learn: “That would be far too expensive. Instead, we use dedicated research vessels, for example in the port of Trondheim in Norway.”

The research project with the title “BugWright2 Autonomous Robotic Insepction and Maintenance on Ship Hulls and Storage Tanks” is being carried out by an international consortium led by Cédric Pradalier of the French Centre National de la Recherche Scientifique together with a total of 21 partners (including the University of Klagenfurt and Lakeside Labs). It is funded by the European Union’s Horizon 2020 research and innovation programme.