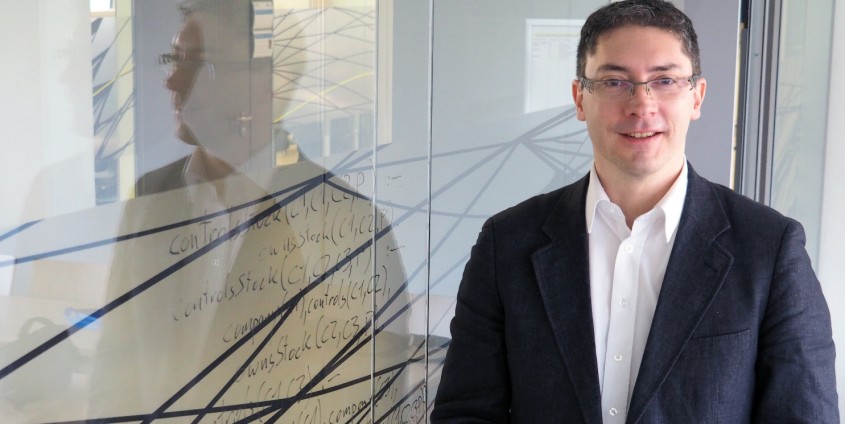 Wolfgang Faber’s work is concerned with exploring how to present meaning in such a way that it can be processed by computer. His research efforts are closely linked to artificial intelligence. He told us how machines can become more rational.

A layperson commissioning a construction firm or an architect to plan a house will describe various ideas: The house should have a cellar and a balcony, the interior spaces should be bright, and the roof should be flat. The expert will take this description and develop a proposal. According to Wolfgang Faber, professor of semantic systems, the same should apply to computers. “I would like computers to be used in a declarative manner. They should no longer be ‘slaves’ that follow imperative orders – we call this procedural –, but rather experts for certain tasks.” In other words, Faber wishes for rationally acting agents that develop proposed solutions for defined problems.

This ideal conception completely lacks the creepy aspect of artificial intelligence, which is often transported by the media, though Faber does go on to admit: “Yes, there are certain forces that strive to develop an artificial intelligence that operates in a human manner. But I ask myself: Why should I want this? I am not interested in creating artificial humans. Instead, I want to create a machine that is better able than we are at carrying out activities we find challenging.” One example of this is the processing of vast amounts of data: Computers can process greater volumes than any human can. Other, more emotionally shaped actions will still be difficult for computers to manage in the future, according to Faber. Searching for an example, we ask: Is it possible to use logic to describe humour to a machine?

Wolfgang Faber is sceptical and points to the field of sub-symbolic artificial intelligence, which employs simplified, artificial neurons and works on the assumption that it is not possible to describe every single thing logically and with the help of symbols. Meaning emerges from the interaction. Symbolic artificial intelligence, on the other hand, a field Wolfgang Faber feels more closely aligned with, comprehends the logical conclusion as the basis of its work. Here, meaning is carried by symbols.

The work of his research group involves many references to mathematics and philosophy. “We study declarative languages and address the question: How can we express knowledge in such a way that it can be processed by a computer? We invent languages and symbols that bear meaning, and we capture their properties, runtime behaviour, and resource consumption.” But these computer scientists do not remain purely on the theoretical level, they also perform programming. The ultimate aim is to develop machines that act rationally and reach reasonable decisions. To do this they must recognise data as such and information must be conveyed in such a way that they can comprehend it. Much of this already works in reality, but in relation to some aspects we are still at the very beginning.

Wolfgang Faber is full professor of semantic systems at the Department of Applied Informatics. He is also a lecturer at the Faculty of Informatics of the Vienna University of Technology. From September 2013 to March 2018 he was professor of artificial intelligence at the School of Computing and Engineering at the University of Huddersfield in England.

Back
People need other people