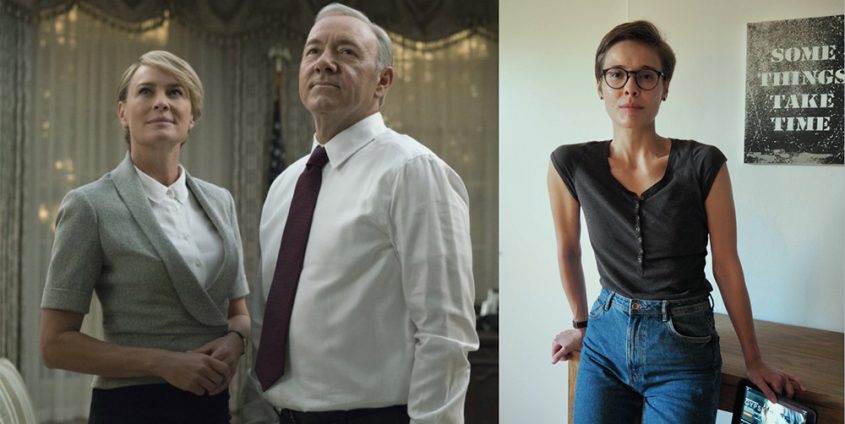 Streaming platforms are gradually taking the place of traditional television. Series on demand are a good money earner. Using the example of ‘House of Cards’, Media researcher Elena Pilipets tells us about the basis of Netflix’s success and how to create a winning series.

House of Cards (HoC) initially started in 2013 as the first in-house production made by Netflix. From the very start, it was accompanied by major hype. What form did this take?

HoC represents sophisticated television programming of high quality that clearly distances itself from the traditional medium of television. The hype surrounding House of Cards was stirred up by Netflix itself, even before the programme first aired, and at first, it was rather unusual due to the associations with data base logic and big data creativity. Add to this the narrative complexity of the series, which is created by a highly elaborate team of writers, with Beau Willimon as show runner and David Fincher as producer. The principal actors, Kevin Spacey and Robin Wright, are not merely involved as actors, but also participate as producers, script co-authors and in specific elements of the scene design.

How does the Netflix distribution system work?

The company started in 1997 when it introduced the first online DVD rental service, which provided existing films and TV series. Due to the user behaviour that was recorded online, it was possible to generate individually tailored recommendations. People got into watching the series and became deeply involved with them. The knowledge of what people enjoy watching ultimately led to the idea to create their own series. Today, Netflix is the market leader in streaming and since 2016, it has been available in every country, except China, North Korea, Syria and the Crimea.

How did the successful product House of Cards come about?

New series often build upon earlier success stories, and this previous knowledge is leveraged when it comes to marketing. HoC is the remake of a successful British series based on a novel by Michael Dobbs, who subsequently also worked for Netflix as a consultant. In the 1990s, the series, which dealt with the issue of post-Thatcherism, was watched by the same audience that also consumed films by David Fincher and films featuring Kevin Spacey as the anti-hero. Later, Netflix translated the British series into a US-American context, making sure it remained attractive for a global audience. This bricolage approach of repeating, blending and re-appropriating in a new context also happens to correspond perfectly with the pop-cultural promise offered by the convergence media and that of Netflix: Produce series with highly diverse content, which reach the right audience at the right time. The point of this series is not to present political reality as close to authentic or a documentary, but rather to playfully invoke the zeitgeist. At the time of the fourth season of HoC, right in the middle of the election campaign between Trump and Clinton, the audience had high expectations – and they were not disappointed.

How is it possible to sustain this level of tension and such a complex story over a long period?

The series perpetually reflects what was and is relevant, but it also provokes. Cliff-hangers at the end of every episode keep surprising us. The tension is sustained by introducing deviations in the repetition, which ensures that our interest is captured. Media Studies refers to this as “mainstream of the minorities”, a popular phenomenon, which is construed to achieve success across a broad context. On the other hand, it is also a niche product and it toys with deviations and border transgressions. The characters in HoC all carry a certain provocative potential: feminism, homo- or bisexuality, racism, drug addiction, murder as well as various sub-cultures or political conflicts, such as the typical conflict between Russia and the USA are all used as subjects. As a member of the audience once perpetually finds oneself challenged and irritated.

Series like HoC cannot be classified as belonging to a classical genre. Why is that and how does it happen?

The genres are merging to an increasing degree. To achieve this desired mixture of genres, qualified media experts are deployed, so-called taggers. Their job consists of watching series excessively, to discover at which points combinations of various genres work well, and where they don’t. Netflix series blend the experiences of the taggers with the creative decisions of the producers and the knowledge derived by algorithms about our viewing behaviour.

Frank Underwood talks to the audience. Why?

HoC combines all the available narrative strategies. The best example is the “tearing down of the fourth wall”, as done by the protagonist Frank Underwood, when he speaks directly to us, the audience. This strategy is well-known from the stage plays of Bertolt Brecht. However, he used it as a strategy of alienation. By introducing an interruption, the audience should be made aware that the play was merely an illusion. Netflix, on the other hand, sells this direct form of address as interactivity, in order to involve the audience in the action even more closely. Simultaneously, Netflix as a media platform is itself breaking through the fourth wall, by offering viewers the suggestion that it is providing 100 per cent contextual content. This recommendation logic is based on the fact that the Netflix corporation is selling something back to us that we ourselves have invested in the series, namely our preferences and our taste, but in a newly combined shape. Thus, Netflix has become a data base of our cultural-specific entertainment preferences.

How does Netflix get hold of the data?

Netflix gives the appearance of conducting the surveying activities in a completely transparent manner and takes pains to emphasise that the private sphere of the viewers is not penetrated in any way. However: Netflix uses an intensive tracking logic. By watching online, it is possible to measure when the viewing is interrupted, or when viewers rewind. These data are stored and analysed. After all, Netflix is not only a cultural phenomenon, but first and foremost, it is an IT business, something it plays with in a very clever way in its own advertising strategies. Serialisation and networking are the two components that define the digital cultural industries of today; House of Cards as a product and Netflix as a media platform are prime examples of this.

Elena Pilipets is a Predoc Scientist at the Department of Media and Communications Science. Her research interests include digital media and popular cultures and she teaches in the areas of Cultural Studies and Media & Cultural Theory.