In order to fulfil its role as a collection institute, the Klagenfurt University Library acquires individual copies of literary works outside of the current degree programmes each year. For example, in addition to the usual manuscripts and old prints, the special collection includes ‘object books’, also known as ‘artist’s books’.

Over the past few decades, a new category of books has emerged worldwide, which is transforming the conception of traditional books and their function as vectors of meaning. The diverse range of forms assumed by these objects, which hover somewhere between works of art and written compositions, and which shrewdly thwart attempts to define and classify them in a world desirous of order, is reflected in the plethora of different names used to describe them: artwork books, object books, performance books, conceptual books … these are just a few of the tentative and ultimately unsuccessful attempts to put a label on this concept.
In the spirit of expanding the notion of books as ‘cultural conventions’, these objects ‘aspire to pose questions regarding the image, writing and the book as physical object and work of art; to trigger hitherto unknown sensations, thoughts, fantasies and pleasures’.
In a fictitious dialogue between two book artists, Demosthene Agrafiotis responds to Diter Rot’s provocative question: ‘what is the point of all this?’: ‘The origins of “artwork books” – i.e. books which are works of art in themselves rather than the means for the diffusion of another work of art (poetry, painting, photography, etc.) – are multiple… [and associated] …with the desire for alternative art to exist in parallel… with the ‘utopia’ of abolishing the boundaries between artist and non-artist, between production and distribution, between high and minor art […]. Today, this world assumes especial importance as modern technologies promise the advent of books without paper and the distribution of information through information super highways.’ 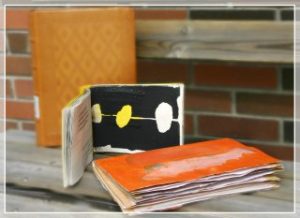 Alpha Presse is an art publisher specialising in the publishing of original artist’s books and lithographic portfolios. All publications are one-of-a-kind. Since it was founded in 1985, Alpha Presse has pursued its own unique path that has very little in common with the traditional conceptions of ‘book art’ and ‘book artist’. The idea behind Alpha Presse was, and remains, to distance itself from the received understanding of what an artist’s book is. The founder of Alpha Presse, Wol Müller, is primarily interested in the material itself. Special care is taken in producing Alpha Presse’s handmade paper, which is made of pure cotton, eucalyptus leaves, denim, Daphne, grasses, bark and other natural substances from a host of different sources. Plastic, synthetic resin, PVC, metal and stone are present in equal measure in the objects. A key term in Alpha Presse’s latest projects is ‘mixed media production’. The creation of the object books is accompanied by events or performances. Sounds and tones are captured on CDs that come together with the books. Over its many years of existence, Alpha Presse has built up a large network of acquaintances both at home and abroad, and is one of the most creative and unconventional companies in its field in Germany. Works published by Alpha Presse are represented in major collections, libraries and museums across the world.