According to Judith Glück, a research scientist specialising in this area, wisdom comes to those who are able to emerge from life-changing experiences stronger. In her book, she introduces five resources that wise people have available to them that help them to overcome the rocky road to wisdom.

How wise are you Ms Glück?
Luckily, I am not yet very wise. To develop wisdom, according to the theory we’re working on, you have to go through some life-changing experiences that can often also be painful. And, so far, I have been spared much of that. However, I have certainly learned a lot thanks to my interest in wisdom and all the interviews I have read with potentially wise people.

What experiences are you talking about?
By this we mean events that hugely alter the lives of those affected, such as illness or divorce for example. The experience doesn’t necessarily have to be negative: the birth of a child also substantially changes a great deal in a person’s life. Impressions that an individual previously had about life are fundamentally changed.

Do most people not become more melancholy, fearful or embittered as a result of negative experiences?
No. Research has, if anything, shown us the opposite is true. Initially, of course, most people react to negative life-changing events with anger and despair, but these are just the normal processes of working through things. Studies show that most people manage to find their way back to a normal state of well-being. But achieving wisdom is something quite different.

What makes wise individuals different?
They subject the difficult or painful aspects of their experience to greater scrutiny. If we take divorce as an example; something the individual did not want, but which happened anyway: you can regain your sense of well-being relatively quickly, and get back your self-worth by telling yourself the other individual was a bad person and they were responsible for the divorce. But you could also ask yourself: what’s happened here? How do I feel about it and how does the other person feel? Can I understand the other person’s behaviour? What developments led to this situation? What can I learn from this? Wise individuals are able to tolerate high levels of openness, which they need in order to continue to develop themselves further. In addition, you have to start to question a great deal of the accepted doctrines and start to ask questions in order to make fresh advances. That is not always easy.

How does your research work, or in other words, how do you find wise individuals?
Wise people cannot register themselves with us, they have to be nominated by someone else. We work under the assumption that anyone who would consider themselves wise isn’t necessarily unwise, but the probability is quite high that their ability for self-reflection and self-awareness is not quite so highly pronounced. And a truly wise individual would be recognised as such by others and then nominated.

Who are these people who are nominated?
The range is very wide. We have nominations for everything from mountain farmers to individuals with higher levels of education. Men and women are fairly evenly represented. On the whole it tends to be older people, but we also have some younger nominees. The nominators tend to suggest people who have been through a lot, but who nevertheless have a positive attitude towards life. Or individuals who give advice to others without being patronising. A high level of serenity and an enjoyment of life also tend to signpost these individuals.

Is it easy to measure wisdom?
We conduct interviews and then evaluate them qualitatively. We do, however, have to grapple with many problems in doing so, as elements such as body language and expressions are often not recorded in the transcripts and our criteria can sometimes be quite complex. Of course, the fact that those being interviewed are aware they are being asked about wisdom also plays a role.

Can this effect be filtered out?
We once did a study looking at what happened if we directly instructed people to answer wisely. The results showed that wise people then responded even more wisely. Those who, relatively speaking, had less wisdom were then even less wise. Showing you can only simulate wisdom to a point. There are, for example, individuals who play the role of being wise. But, more often than not, it soon becomes clear that it is just about self-affirmation in cases like these.

Is wisdom a stable characteristic or is it possible to only be wise some of the time?
A lot of our studies indicate this. If, for example, you ask individuals about a situation where they have shown wisdom, almost everyone would be able to give an example of an event where this was the case. In another study, we conducted two interviews with the individuals involved: on one occasion we asked them about a difficult event of their choice, and on another occasion we asked them about a specific conflict. The correlation between the two measurements was surprisingly weak, so it could be that someone can speak very wisely about one conflict, but less so about a difficult event. Wisdom does not necessarily have to be a stable personal characteristic.

How can a young person with many life-changing experiences still ahead of them prepare themselves for life?
The attitude we assume to be the basis for wisdom can be developed from an early age. You can train openness, and being open to new things and ideas. You can get to know yourself and your emotions, and learn to take them seriously. You can change your perspectives and empathise with others. These are all things you can do at any age.

Do you think wisdom is important in today’s society?
If we assume that wisdom concerns the fundamental questions of human life, then these do not change, meaning it must be of equal importance for every era, i.e., being able to come to terms with mortality. On the other hand, I do believe different times place different demands on people. Nowadays, people have a great deal of choice, coupled with the challenge of wanting and having to shape their own lives. Trust in the elderly and their expertise has lost its meaning, and at the same time we have more knowledge, more ways of communicating and more opportunities for contact than ever before. I don’t know whether these are good or bad times for the development of wisdom.

Reflection is more en voguenow than ever, isn’t it?
Yes, absolutely. But even here I’ve noticed a balancing act: on the one hand there is this strong trend for self-reflection, which can often lead to people focusing too much on themselves. Then on the other hand there is the concept of wisdom as the transcendence of self, which assumes you first have to have a high level of self-awareness in order to then learn to accept yourself. From this point, the individual can look beyond themselves and start to accept others as they actually are. Although there seem to be very few people who are actually able to do this.

You write in your book that your theories on wisdom refer to Central Europe in the 21st century. How is it different elsewhere?
There has been research into wisdom in other regions, but it has not received a great deal of attention. Last summer we had a guest researcher from Iran at the Institute with us, who was researching children’s concepts of wisdom back in her homeland. The Iranian children described wise individuals much more strongly in terms of their religion and as integrated to a far greater extent in value and control systems, whereas in Central Europe even children see wise figures much more as individuals. For us here, a wise person is more frequently seen as someone who takes centre stage and gives advice, whereas in Asia a more unassuming figure who fits in and is characterised to a greater extent by emotional aspects, such as having a certain serenity, is likely to be defined as wise. However, there are also a large number of similarities.

for ad astra: Romy Müller | The photo shoot for the ad-astra-cover story took place at the Landskron Castle eagle arena with the Siberian Eagle Owl Rasputin.

How long have people been researching wisdom?

Psychological research into wisdom is a young discipline and is closely linked to developmental psychology. Initial approaches that took into account not only childhood but also a person’s further development go back to the 1920s.

In 1950, the psychoanalyst Erik H. Erikson presented his thesis which argued that each phase of life is characterised by a specific conflict; such as in old age, where the predominant issue is trying to see the life you have lived as meaningful in its entirety.

Psychological research into wisdom developed in the 1980s as other scientific fields began to take an interest in age. The Max-Planck-Institut for Educational Research in Berlin founded a Research Centre for Lifespan Psychology in 1980, which was led and significantly shaped by Paul B. Baltes. The first empirical studies into wisdom followed, from which the conclusion arose that wisdom is expert knowledge about the fundamental issues of human life. The Berlin Wisdom Paradigm was the only method of research into wisdom for a long time.

Since 2000, the field has expanded considerably, among other things due to the influence of Monika Ardelt, a professor of sociology, who emphasised that, while knowledge actually belongs to the idea of wisdom, the fundamentals of wisdom lie in a specific personality structure. Michael R. Levenson introduced a further aspect to the discussion, viewing transcendence as the central aspect of wisdom. For Levenson, wise individuals subjected themselves to intense, critical self-examination and were therefore in a position to accept their own positive and negative sides. Robert J. Sternberg placed greater emphasis in his work on how wise individuals think: They can balance out varying interests – their own, those of others and those of society – for the good of everyone involved.

Most theories on wisdom are by no means incompatible and are closely related to one another. Judith Glück’s research group at the Alpen-Adria-Universität works to combine key elements of all the various theories, so as to include both knowledge and also personality characteristics.

Judith Glück, born in 1969, studied psychology at the University of Vienna and completed her doctorate there. Until 2002, she was a Postdoctoral Research Fellow for Lifespan Psychology at the Max-Planck-Institut for Human Development in Berlin. After her habilitation thesis in 2002, she returned to the University of Vienna as an Associate Professor for Developmental Psychology. Since 2007, she has been a Professor for Developmental Psychology at the AAU’s Institute for Psychology. She heads several research projects on wisdom, among others including those supported by the Austrian Science Fund (FWF). In future, she would like to focus on wisdom within certain occupational fields, specifically teaching. 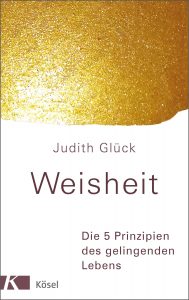 The five principles of a successful life