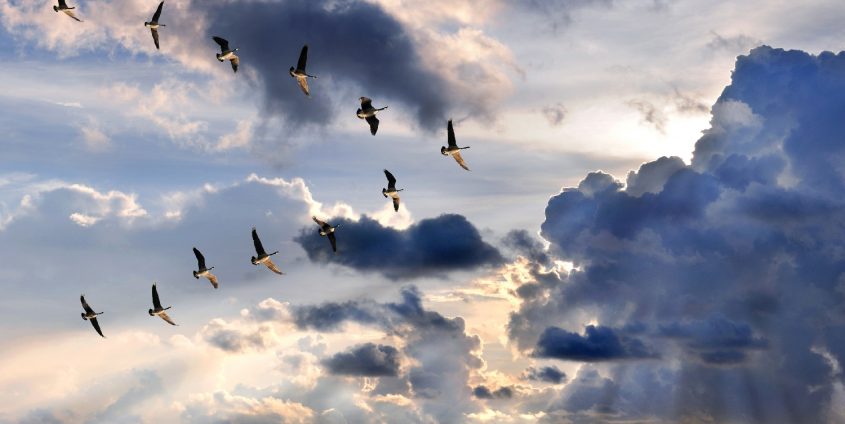 A shark glides silently through the dark water on Paul Schweinzer’s monitor. Sharks are cartilaginous fish and as such they are not equipped with swimming bladders; they have to keep in constant motion to avoid sinking. Watching carefully, however, it is clear that the shark in the YouTube video regularly rests between phases of active propulsion. The pattern that emerges is one of accelerated ascent and gentle descent, of activity and recovery.

Schweinzer takes observations such as this one and transfers them to human behaviour. Some insights relating to the individual can be transposed to teams. Others only reveal their full effect when we consider group processes, as factors such as competition, level of qualification, or remuneration also have a part to play. Schweinzer’s research work involves identifying complex processes, translating them into compact models, and solving them analytically. At the end of a series of experiments and adjustments, ideally, the result will be a meaningful formula that can serve as a basis for a mathematical proof, and may even provide useful insights for practitioners.

“One of the typical phenomena we find in teams is the free rider effect”, according to Paul Schweinzer, who is full professor at the Department of Economics. If we take a joint publication by a number of co-authors, the specific contribution of each separate individual is sometimes hard to determine. They produce their common output by delivering individual, often rather elusive performances. While they all enjoy an equal share in the result, the costs are borne individually, and can be distributed very unevenly.

Paul Schweinzer goes on to describe a second team effect, the so-called Apollo Syndrome. First observed by the management theorist Meredith Belbin, who conducted a series of management games at the end of the 1970s, the concept describes a fascinating phenomenon in team composition. Groups composed purely of highly qualified individuals often achieve worse results than teams with mixed qualification profiles. Working with his fellow researcher Alex Gershkov from Jerusalem, Schweinzer is investigating the selection mechanisms that can contribute to reducing the error rate in decision-making processes. For instance, they are looking at the importance of being aware of the current status of each team member in relation to the selection process, and they are running tests to see what happens when people have either very similar or very different qualification profiles.

Studies on productivity
Citing an example with two team members (e.g. pilot and co-pilot), Schweinzer explains that the productivity modelled for the pilot tends to drop as time passes. Meanwhile the co-pilot rests, which means that his potential productivity increases. After an initial stage of intense activity, the team leader reaches a state of fatigue, which is accompanied by decreasing joint output. This is an ideal moment to replace the tired team leader with a well-rested person: In the theoretical model, this so-called leadership rotation results in a rising team productivity curve, as the leadership of the team does not simply pass to the person who is formally best qualified, but rather it is awarded to the person who is best suited to the job overall. However, in the real world, team leaders – regardless of their level of fatigue – are usually not inclined to give up their function or the associated higher salary. This can lead to inefficiencies.

What we can learn from geese
A great deal of research effort is being devoted to this problem, as the potential benefits of rotating the team leadership and taking care with the team composition can be further illustrated by using another example from the animal kingdom. Paul Schweinzer offers the following insights: When geese head south in late autumn they adopt the familiar wedge formation. This offers the migrating birds several advantages on their gruelling journey: By taking up their positions in a V shape, they can improve the flock’s communication, synchronise their wingbeats, maintain visual contact and thus they are better able to determine their own positions and avoid collisions. The leading goose has the hardest job, as it uses up far more energy in its position at the tip of the wedge. Less exhausted geese rotate into the lead position at regular intervals, thus helping to keep the aerodynamic structure stable over vast distances.

What theoretical calculations seemed to suggest as far back as 1970, an international research team led by Steven Portugal from the University of London was able to prove in 2014, using the example of live migratory birds: Flying in an aerodynamically optimised formation saves a lot of energy; by cooperating, the birds can travel significantly greater distances than lone fliers can manage.

Recommendations for a modern working world
Let us return to the shark and his phases of activity and rest: Paul Schweinzer tells us about the MIT graduate, game theorist and World Bank economist Maya Eden, whose acquaintance he first made roughly ten years ago, when they happened to meet in the same footnote. Amongst other projects, Maya Eden studies the optimized coordination of production and, in this context, she has put forward some ground-breaking ideas for discussion. For instance, using an aggregated model that she calibrated with large volumes of productivity data, she looked at the potential impact of a introducing a fundamental change to the traditional working week. She identified potential improvements in wellbeing and in the productivity of workers. Studies clearly show that a long working week can lead to fatigue and stress effects, which manifest as productivity losses. At the same time, scientists also believe that regular extended absences may result in the slower accumulation or even to the erosion of work-related skills over time. According to Eden, this could be remedied by radically restructuring the working week and applying a 3-1 pattern, where three working days are followed by one day of rest, instead of the usual 5-2 rhythm.

Using these and similar creative ideas, Schweinzer and his colleagues enhance their models and incorporate exciting observations from nature in their studies on the composition and function of teams.

Back
The end of the West?

How we communicate with machines