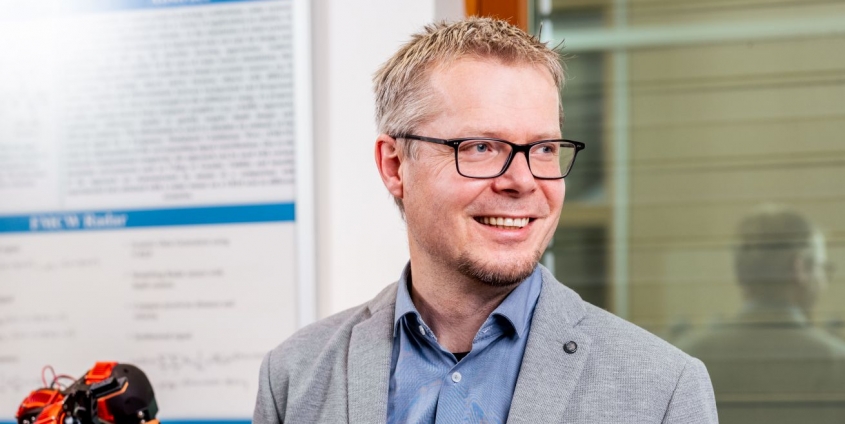 Hubert Zangl conducts research on sensors: The aim is to allow robots to cooperate more effectively with humans in the future, but also to equip them with “environments enhanced with perception”.

We are still a long way from the fantasies of science fiction authors: Hubert Zangl, who conducts research on sensors and robotics at the Department of Smart Systems Technologies at the University of Klagenfurt, shares a sobering insight into what robots can do when interacting with humans. “Human interaction also involves non-verbal communication. They are aware of each other and can thus anticipate what the other person is planning to do next. Robots have yet to be equipped with the perceptual capabilities required to collaborate safely, efficiently, dynamically and quickly with humans,“ he explains.

Robots that can recognise and perform various tasks as quasi-independent beings are clearly still a thing of the future. At present, the demand is particularly strong for tasks in industry, as the example of object packaging shows. This also helps to clarify what robots are good at and what they are less good at. “A robot is adept at repeatedly grabbing objects of the same kind and placing them in a package. In this respect, it has an advantage over the human being: He tends to tire less, is very precise in its work and can sustain a great deal of effort over a relatively long period of time“, Hubert Zangl tells us. However, a robot would soon reach its limits if the objects to be packaged differed significantly or if they consisted of materials that are difficult to grasp or sensitive. This requires a delicate touch: “Using their senses, humans quickly detect whether an object is at risk of slipping, whether they have a poor grip on it or whether it needs to be handled very carefully owing to its material. We need to replicate this sensory capability for robots in order to equip them for similar tasks.”

Image recognition and classification are also helpful in this regard. This means that whenever the packing robot in our example sees something very delicate approaching on the conveyor belt, it should recognise that this needs to be handled with greater care. This is already quite feasible from a distance, even for robots, however, Hubert Zangl continues: “The focus of our work is on perception in close proximity, i.e. from the last 20 to 40 centimetres to the point of contact.”

This range is particularly important in cases where humans and robots need to work together. A robot is expected to be able to react to humans and, depending on the state of collaboration, either speed up or slow down, take over or let go of objects. Today, conventional industrial robots are typically made of rigid materials and are relatively inflexible. The human body, on the other hand, is elastic and pliable to some extent. Researchers like Hubert Zangl are now working with so-called “structurally elastic” robots, which give way when they are jostled, to give an example. During the interview for this article, Hubert Zangl demonstrates a supple robotic finger made of flexible components. The idea is to fit it with sensors in such a way that it approximates the functionality of a human finger as closely as possible.

“To a certain extent, human cells are in a process of perpetual regeneration. We need to achieve similar effects for robots by other means.”
(Hubert Zangl)

In this context, sensors are required to meet a wide range of requirements: They must also be pliable and sensitive and as energy-efficient as possible, and they must be durable even though they are exposed to continuous mechanical stress. “To a certain extent, human cells are in a process of perpetual regeneration. We need to achieve similar effects for robots by other means”, according to Zangl. In his line of research, it is imperative to keep a watchful eye on the human condition as well, since the aim is to facilitate collaboration between human and machine. “Much like dummies for crash tests, our research needs models of humans that behave like real people in terms of the sensory effects involved.”, Zangl goes on to explain. He shows us the model of a “standard head” used in comparable and reproducible experiments.

How does someone who works at the heart of the relevant research fields perceive technological visions of the future? “Over the past few years, many things have progressed more quickly than I had expected. One example of this is the issue of communication. Today, we can make phone calls, watch videos and play games all at once using a tiny mobile device. A great deal of this communication technology has paved the way for other technological developments.“ Zangl describes the ongoing development of autonomous driving as particularly exciting. After all: “Put simply, the robot, i.e. the car, ‘only’ has the task of not driving into anything on the way from A to B. Nonetheless, the technology involved is extremely sophisticated because it involves interacting with unfamiliar environments and with humans. That is also where our major challenge lies.”

But it is not just robots that need to be equipped with additional sensors and thus more sensory impressions, but entire environments as well. The research team headed by Hubert Zangl operates the “Ubiquitous Sensing Lab (USE-Lab)” together with Silicon Austria Labs, where they aim to equip environments with perception. “Intelligent environments such as smart buildings are only ‘intelligent’ if they can perceive what is going on”, Zangl states. The idea is to install sensors ‘everywhere’ without compromising the original purpose of the environment. Here, too, the bar is set high: The sensors must be low-maintenance, reliable in the performance of their tasks, capable of communicating with each other without cables if possible, and consume little energy or draw it directly from the environment. Fields of application include building technology, but also the monitoring of bridges and other types of infrastructure with regard to their safety.

Much of the work conducted by Hubert Zangl and his colleagues involves computer simulations, but they also perform laboratory experiments. The areas also intersect to a certain degree, with some machines being so small that they can easily fit on a desk. After all, no modern laboratory can function without the computational power of computers. “Here, in our sphere of work, just as elsewhere, the real world and the cyber world are gradually converging.”, Zangl concludes.