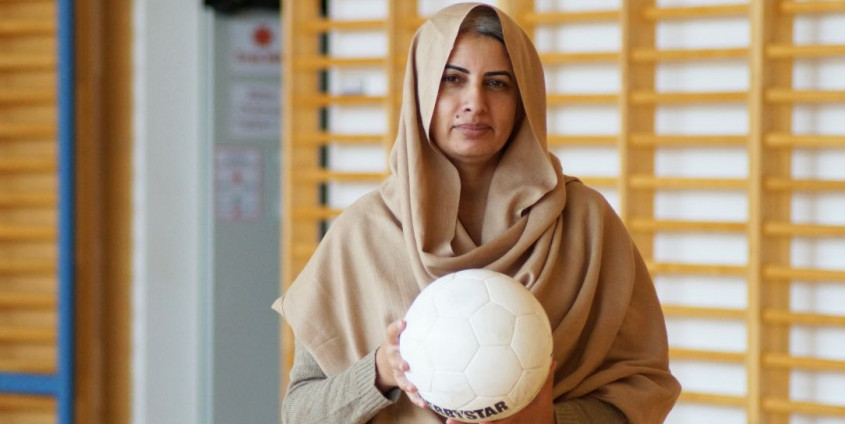 In Madrid, Barcelona or Munich, millionaires attempt to kick balls into goals. The same balls are produced for just a few cents in China, India, Pakistan and Thailand. Global markets insist on ethical standards for the countries of production, and yet these very same standards threaten existences in the affected countries. For her doctoral thesis, Farah Naz examined football production in Pakistan. In this interview, she tells us why it is important to think in shades of grey, rather than in black and white.

How are high-quality footballs produced?
The main site of football production lies in Pakistan, where the individual panels are manufactured in factories and subsequently turned into footballs by female homeworkers. The production chain involves a large number of subcontractors. The last link in the chain is made up of these women, who usually work in their homes and only earn around 30 to 40 cent for a football, which subsequently retails for around 100 Euro in this part of the world. The vast discrepancy between these different worlds is palpable:  My research took me to small villages, which are far removed from the large cities and hard to reach. One of the homeworkers I encountered there showed me a ball with the words “Red Bull Salzburg” printed on it. That was the last thing I had expected to come across there.

Do the local production conditions meet the expectations we have here in the West?
Consumers in the Western world exhibit a greater level of awareness in the decisions they make. As a result of this pressure, corporations and international brands invest heavily in Corporate Social Responsibility, working hard to establish a positive image. Non-governmental organisations and consumer associations further add to this pressure. The consequence is the production of standards, strategies and agreements which determine how work should be performed in Pakistan and in other countries. The main aim of this is to satisfy the general public.

That’s worthy of support, isn’t it?
Yes, but it is also important to bear in mind the cultural and economic conditions in the countries of production, and to be able to recognise that a different value system applies there. It is entirely possible that well-intentioned guidelines produce catastrophic consequences elsewhere.

Can you give us an example?
During the 1990s there was a scandal surrounding the issue of child labour in the football industry. As a result, home working was prohibited. Female football sewers were required to perform their work in production centres, in an attempt to prevent child labour. However, even in these centres, there is absolutely no guarantee that all employees will receive an employment contract and relevant rights. The prohibition of home working was disastrous for many women in Pakistan.

Why?
Women were suddenly discriminated against: The infrastructure prevents many women from travelling to a production centre. In addition, the provision of childcare in Pakistan is barely developed, and caring for the ill is both difficult and expensive. What is more, due to cultural practices, it is impossible for many women to pursue gainful employment beyond the walls of their own home, as the men are still regarded as the breadwinners in public. Suddenly, the families were bereft of an important income component.

What were the results?
Among the families I interviewed, it isn’t about luxury items, it’s about the next meal. Women are responsible for the organisation of all domestic arrangements; and yet, suddenly, they can no longer dispose of their own income. The overall result is a significant decline in football production, leading to further drastic cuts in the economic structure of the region.

Was there a benefit for the children, at least?
No. Lower incomes for the families generally produce worse conditions for the children. If they were previously allowed to help at home within the family context, now they frequently have to seek employment in the free labour market, which harbours far more danger. What is more, schooling becomes even less accessible for them, not least because the educational system in Pakistan features a rapidly expanding private sector.

To what extent are these effects perceived in the Western world?
In these regions, knowledge was passed on along informal paths; in this case, it was the know-how relating to the production of high-quality footballs. Children learned the craft from their mothers at a very young age. This work also endowed them with a certain status, which is also experiencing a decline today. In summary, the entire world is losing both human capital and knowledge.

So what went wrong?
On a global level, it is important to think more carefully about the mechanisms and consequences of individual action. Issuing guidelines in one location does not necessarily mean that they will produce positive effects elsewhere. Between black and white there are many shades of grey, which must also be considered. I have spoken to many parents: They all have dreams for their children and wish for a better future for them. In order to make this possible, it is necessary to pursue the grand solutions.

Can you expand on that?
The Western world needs to ask itself this: Is it our aim that no child shall work? Or do we want a world, where no child is forced to work? Those who work in football production receive very little remuneration. With wages such as these, the conditions are not going to improve.

What can I do as a consumer?
The behaviour of the consumers placed pressure on international brands. Before this happened, they had paid no attention at all to the issue of ethics. In other words, a first step has been taken. Now, it is a matter of steering the awakened consciousness in the right direction: We must all develop a deeper understanding of the fact that we live in a globalised world with international markets, but it is a world with pronounced regional differences. Everything is interlinked. We must be aware of this.

Farah Naz and her two children came to Austria for a period a three years, so she could write her doctoral thesis under the guidance of Dieter Bögenhold (Department of Sociology), focusing on the topic “Political Economy and Business Ethics of Football Production. How Do Female Home-Based Workers Contribute to Global Supply Chains?” She completed her work in the winter of 2016. She works as a lecturer at the University of Sargodha in Pakistan.