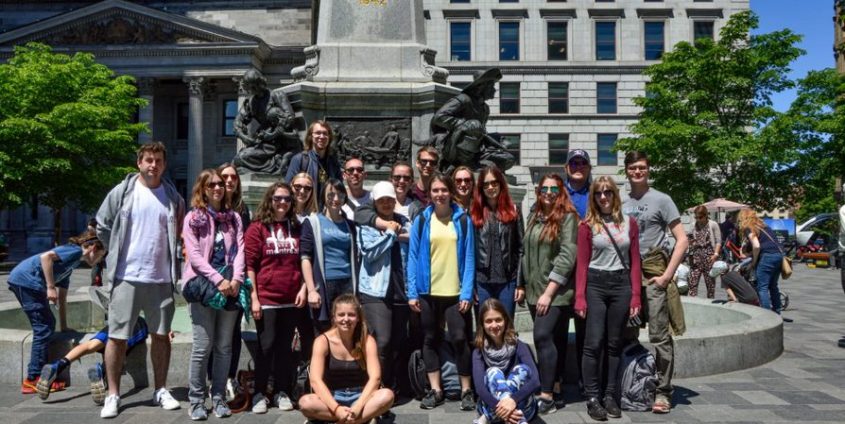 In her final post in the O’Canada blog series, Tamara Urach, student on the teacher training programme, reflects on this year’s student excursion to Canada and decides whether it’s an opportunity worth taking.

Looking back – going back?

It has been a few weeks since we arrived back home from our trip to Canada, and the question now is – what remains? What remains are many memories – good ones, funny ones, awkward ones and also slightly unpleasant ones, but this is what makes an awesome journey.

We experienced many hilarious things, such as a woman dancing with her shoes to Paramore’s “Still into You” (in case you’re wondering, no, she wasn’t sober) as well as people trying to sell us their EP’s on the street. We were also the ones who acted weird at times, for example, when we visited the botanical garden in Montréal and sprung a question on a local lady about whether she knew the whereabouts of Mother Earth (a famous live sculpture at the gardens). We must have appeared to be religious missionaries. Some of us also went crazy about the French word “arrêt” on stop signs (I blame Guido).

Our memories are mainly funny and good ones. Some of us lost our sympathy for dinosaurs after our museum guide in Toronto tried to explain Canada’s nation building with dinosaurs. Far cuter animals were raccoons – some of us immediately fell in love with Dash (yes, he introduced himself to us), a sweet raccoon who begged us to give him some sweets on Mont Royal in Montréal. Most importantly, we discovered that Canadians are really friendly people (except from the one or other bus lady). Some of us got lost in the underground cities and on the Metro multiple times, but we were always helped by friendly locals.

Is it worth going on this excursion with the university?

The answer is short and simple – YES, definitely! The tour was worth the money and the experience was extraordinary. If you have the chance as a student to go on this excursion, go for it! We did not have to worry about anything as we were picked up from and dropped off at the airports and train stations, the hotels were booked, the staff were always very helpful, and we had a great programme that was well suited to the topic of the course “The Founding of Canada – Canada’s Development from Settlement to Nation.”

We learnt a great deal about the various aspects of Canada’s history, especially the First Nations and the Colonial era. Furthermore, because our programme mainly took place before midday, we were able to visit places that were interesting to us during the afternoons. Even our evenings were full of fun activities, such as going to the cinema, enjoying a good meal with friends and colleagues, or simply relaxing by the pool in our hotel.

One of the best parts of this excursion was that we were able to get to know many new people. Before the trip, some of us did not know each other at all, so it was a nice opportunity to meet new people and form new friendships. We got along very well with each other and our teachers René, who put so much effort into planning the excursion, thank you so much, and Natilly, who was willing to go on an adventure with this bunch of students and even sang karaoke with some of us.

So to end this series, here’s to a trip that none of us will ever forget, and hopefully, to another trip to Canada in the future, which we will consider taking part in again.

Text and photo by Tamara Urach

Friederike Wall is elected Scientific Advisory Board Member of the Austrian...