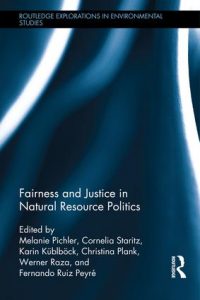 As demand for natural resources increases due to the rise in world population and living standards, conflicts over their access and control are becoming more prevalent. This book critically assesses different approaches to and conceptualizations of resource fairness and justice and applies them to the analysis of resource conflicts.

Approaches addressed include cosmopolitan liberalism, political economy and political ecology. These are applied at various scales (local, national, international) and to initiatives and instruments in public and private resource governance, such as corporate social responsibility instruments, certification schemes, international law and commodity markets. In doing so, the contributions contrast existing approaches to fairness and justice and extend them by taking into account the interplay between political scales, regions, resources, and power structures in “glocalized” resource politics.
Various case studies are included concerning agriculture, agrofuels, land grabbing, water resources, mining and biodiversity. The volume adds to the academic and policy debate by bringing together a variety of disciplines and perspectives in order to advance both a research and policy agenda that puts notions of resource fairness and justice center-stage.

To unsubscribe simply reply to this email with “unsubscribe” in the subject line.