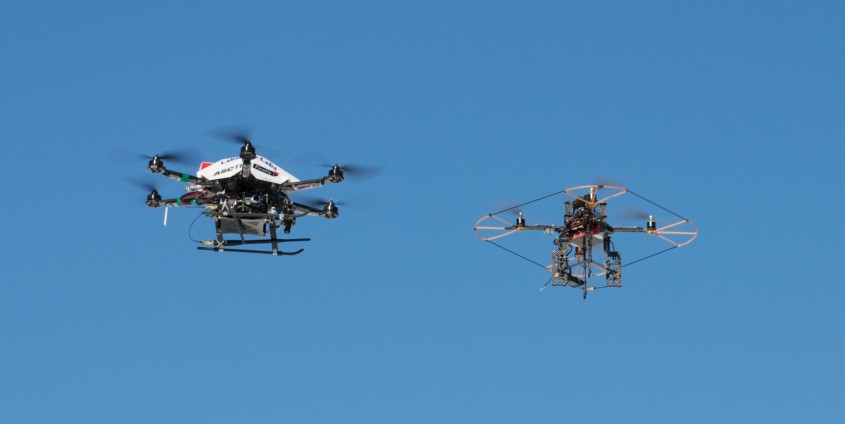 Drones are used in an ever-increasing number of applications, including the autonomous delivery of medication and the inspection of industrial plants. To fulfil these tasks safely and reliably as they move through our airspace, drones need to be linked to high-performance cellular networks. The new mobile telecommunication generation 5G promises new possibilities with high data rates and low latency. Working with a 5G base station operated by Magenta in the Austrian community of Feichtendorf, a team of researchers from the University of Klagenfurt, Lakeside Labs GmbH, Magenta Telekom GmbH and Deutsche Telekom AG has recently conducted drone tests in a commercial 5G network. The scientific results were presented at the ACM MobiSys conference in mid-June.

“Communicating with drones via cellular networks poses new challenges”, according to Christian Raffelsberger, who works as a project manager for Lakeside Labs GmbH. Existing networks are designed in such a way that the data exchange is optimised for devices on the ground. However, a drone moves through the air: As a result, it may have line-of-sight connections to several base stations, which may cause disruptions in the data exchange. On the other hand, the drone itself may also cause interference within the network.

In order to find out how quickly information can be transmitted to the drone or back to the base station, the team carried out initial field experiments in Carinthia. Christian Bettstetter, Professor for Mobile Systems at the University of Klagenfurt and Scientific Director of Lakeside Labs GmbH, expands on the results: “Transmitting from the base station to the drone, we were able to exploit the advantages of 5G and transfer at an average rate of 600 Mbps. On the return link, we only managed data rates comparable to LTE/4G.”

The 5G base station in Feichtendorf simultaneously transmits LTE signals. The experiments demonstrated that the drone frequently falls back to LTE, which is currently often the stronger signal.

To be able to use the new technologies efficiently in the future, there is now a need for solutions. As Christian Raffelsberger points out: “In the ongoing development of mobile telecommunication standards, care will be taken to ensure that they can also be used by drones in the future.” For example, antennas are specifically steered between the airspace and the ground, to ensure that the individual receivers can gain the maximum available performance, while causing as little interference as possible.