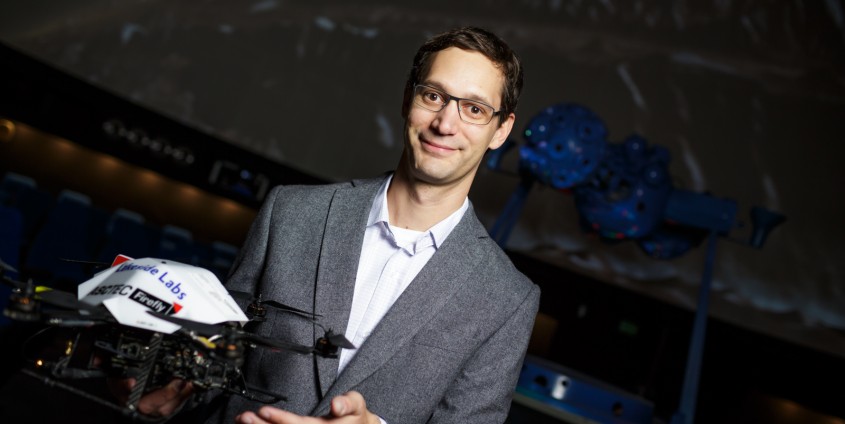 When JPL-NASA staff member Stephan Weiss demonstrated his drone navigation technology during a flight demonstration in 2013, Charles Elachi, head of JPL at the time, asked him: “Can we fly this on Mars?” This marked the beginning of a successful development story, which will shortly culminate in the Mars Mission 2020 deployment of an adapted version of the drone flight technology developed by Weiss, who is now a professor at the Alpen-Adria-Universität.

As NASA announced in a press release late last week, the so-called Mars helicopter, a small drone that uses camera-based navigation, i.e. it manages without a GPS signal, will be on board when the July 2020 Mars Mission takes off. This tiny aircraft will be used to explore areas that are inaccessible for the Mars Rover and it is expected to provide unique images and data for Mars.

John Culberson, U.S. Rep. of Texas, was moved to draw an historical comparison: “It’s fitting that the United States of America is the first nation in history to fly the first heavier-than-air craft on another world”.

Stephan Weiss (Department of Smart Systems Technologies) played a crucial part in the development of this Mars helicopter project. For his doctoral thesis at ETH Zurich he developed an algorithm that permits navigation via camera, without requiring a GPS signal. This technology has been continuously advanced in recent years and will now be deployed during the Mars Mission. Stephan Weiss agrees that “this is indeed an historic event, and I am delighted that my work and the ideas I developed in my doctoral thesis can contribute to this important stage in the exploration of Mars.”