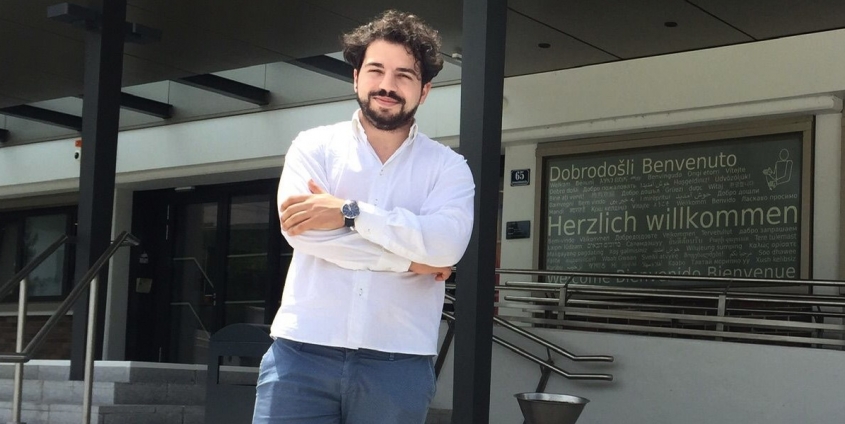 As a writer, he left many literary traces behind. Yet all too few readers have followed along his linguistic paths, argues Giacomo Carlesso. The doctoral student is preparing his doctoral thesis within the scope of the joint doctoral programme “Italian Studies” at the Università Ca’Foscari Venezia and at the University of Klagenfurt. He talks to us about his fascination with the Treviso author Giovanni Comisso.

Giovanni Comisso belongs to the group of 20th century Italian writers who received recognition from numerous other important authors and critics, but whose books earned little publishing success and were rarely read. Comisso was born in Treviso in 1895 and died there in 1969. He served as a soldier in the First World War, studied law, but never practised as a lawyer. Instead, he worked as a journalist for numerous major Italian newspapers such as Corriere della Sera, Gazzetta del Popolo and La Stampa, often travelling to Northern Europe, Africa and the Far East.

Giacomo Carlesso, a doctoral student at the Università Ca’Foscari in Venice, who is writing his doctoral thesis as part of the joint doctoral programme “Italian Studies”, is particularly interested in the texts Comisso composed during his travels. “The aim of my project is to produce an annotated edition of Giovanni Comisso’s published and unpublished travel correspondence,” he tells us in the interview.

The aim of Giacomo Carlesso’s endeavour is to make “a small contribution not only to science, but also to the cultural heritage of the Veneto region and of Italy”. He sees Giovanni Comisso as an important artist whose work remains largely unknown and under-researched.

Comisso, he explains, was a fascinating person, especially with regard to his reputation as a curious and difficult writer. “His papers were disorderly in the extreme. He was constantly entering into collaborations with newspapers and magazines. His stories were erratic. He kept rewriting them – and he published them in multiple venues and as more than one version.” It is this creative chaos that Giacomo Carlesso – supervised by Alessandro Cinquegrani – hopes to explore in his doctoral thesis: “Taking the letters as a starting point, I will attempt to clarify and reconstruct the biographical and bibliographical aspects associated with the journeys. This should prove useful for a first comprehensive re-interpretation of his entire oeuvre.”

Giacomo Carlesso completed his Master’s degree in Italian Philology and Literature in Venice before embarking on his doctoral studies. We ask him why he feels it is important to pursue Italian studies and we learn the following: “This degree programme is a great opportunity to develop one’s capacity for critical thinking. Students learn to understand and analyse interrelationships. It also allows a deeper understanding of our inner selves and the inner selves of the people around us.” With an eye to the future, this has the following significance for him: “Students are not merely equipped for a career in research and teaching, but rather these skills will accompany me throughout my life. They are of great value for my future.”

A few words with … Giacomo Carlesso

What motivates you to work in science?
On the one hand, I am motivated by passion and, on the other, by the desire to make my own small contribution to restoring culture to the central role it has lost in recent decades.

Do your parents understand what you are working on?
Although they work in a completely different field, they are both familiar with the subject of my studies.

What is the first thing you do when you get to the office in the morning?
The first thing I do is tidy my desk. Outer order aids inner order.

Do you take proper holidays? Without thinking about your work?
Not at the moment, I’m really involved with my work right now.

What makes you furious?
Generally? Hypocrisy

And what calms you down?
I feel reassured to know that I have done all I can in my attempt to reach a goal.

Who do you regard as the greatest scientist in history and why?
I don’t really know how to answer this question. I’ve honestly never given it a thought. I suppose in my field of research it is essential to question the big ideas rather than asking who was a better scientist. Literary criticism is a continuous exchange. What determines the excellence of a scientist are the big ideas, and without them we would not witness new generations of great scientists.

What are you afraid of?
I am afraid of what I do not know.